U.S. F-22s, along with E-3s, F-16s, KC-135 and B-1s took part on Apr. 4, 2012, to an exercise aimed at validating Bones capability to successfully perform long range strike missions similar to one conducted in Libya in the early stages of Operation Odyssey Dawn.

Dubbed Operation Chimichanga, the exercise saw three B-1 bombers from the 37th Bomb Squadron flying from Ellsworth AFB, South Dakota, to Fort Yukon, Alaska to conduct a combat a 10-hour round trip training mission based off lessons learned from their raid in Libya.

In particular, Operation Chimichanga gave the 37th BS crews the opportunity to test the tactics and procedures for “a more robust and accurate in-flight planning and retargeting of the AGM-158 Joint Air-Surface Stanfoff Missile.”

A B-1 can accommodate up to 24 radar-evading JASSM in its bomb bays. This GPS-guided cruise missiles with 2,250-lbs warhead, can be fired from more than 200 miles, even if it will be replaced, beginning next year, by a JASSM-ER (extended-range) AGM-158B that can reach a target 600 miles away.

Among the objective of the operation was also to validate the F-22 and F-16’s ability to escort the bomber into a so-called anti-access target area: with a stealthy cruise missile that can hit a target from about 1,000 km away, the need of escort fighters might become almost superfluous, especially if the B-1 is called into action when the enemy air defenses have been already degraded (as happened in Libya).

Noteworthy, flying for the first time with the most recent “Block 3.1” hardware and softare upgrade, that provides the ability to find and engage ground targets, the Raptors took part to the exercise in a dual role: HVAAE (High Value Air Asset Escort) and air-to-surface, providing the capability to perform an immediate restrike on the same target (or one nearby), if needed. 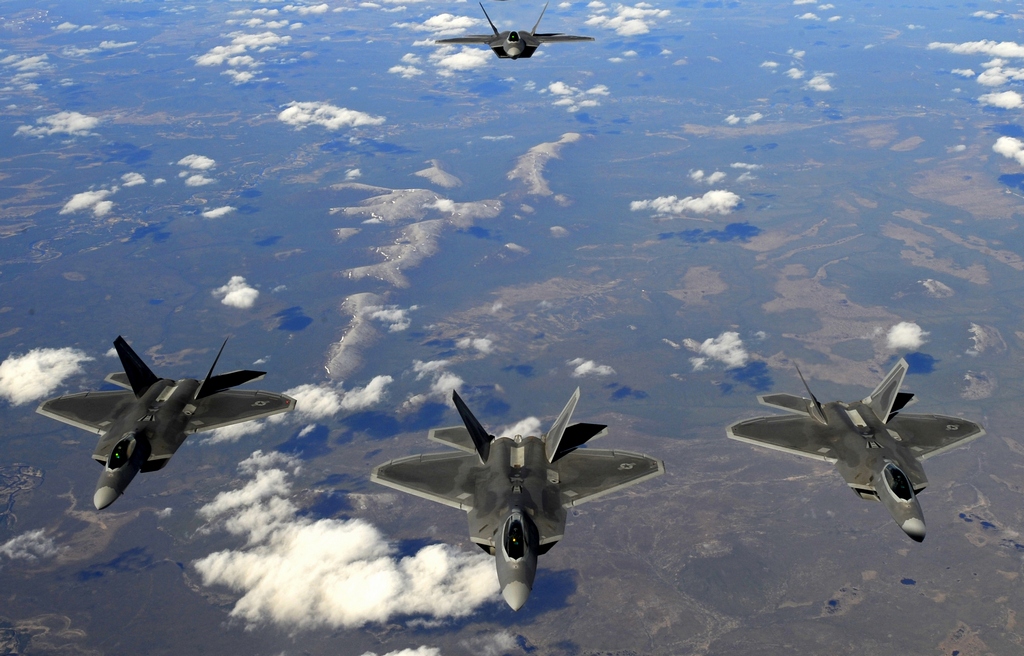 U.S. Air Force B-1B Lancers from Ellsworth AFB landed at Andersen AFB in Guam amid growing tensions in the Indo-Pacific region. Four B-1B Lancer bombers (aka “BONEs” from B-Ones) have deployed to Guam, the U.S. […]

Chemtrails, missiles, meteorites or falling stars? None of them. Simply some F-15s trailing a tanker during a Coronet East mission

Next time you see a scene like that depicted in the following images please don’t be scared. It’s neither chemtrails, nor missiles, nor meteorites or something like that. Most probably, it’s just a flight of […]