The RAF raised the Urgent Operational Requirement last April (2011) and the system is now being tested operationally by 617 Squadron of the RAF, which has a very rich history of using new technology in combat.

The squadron was formed in 1943 at RAF Scampton during world war two and was specifically formed with hand picked crews who flew modified Avro Lancaster bombers to deliver the ground breaking Barnes Wallis designed “Bouncing Bomb” on an attack on four dams in the Rhur Valley (Germany). Later in the war, it was the first squadron to drop the 21,000lb “Grand Slam” on German U-Boat pens, and it was also the first RAF Squadron to use Storm Shadow operationally during operation “Telic” in Iraq during 2003.

History has repeated itself since this new system has been integrated onto aircraft which are now operational in the hostile theater of Afghanistan.

Martin Taylor, BAE Systems Combat Air Support Director said: “Over the coming months, we will continue to work with the customer, to provide the capability across the wider Tornado fleet.”

The new Helmet Mounted Cueing System (HMCS) has passed all of its operational requirements and is now making it easier to indentify the enemy on the ground in very fluid firefights. 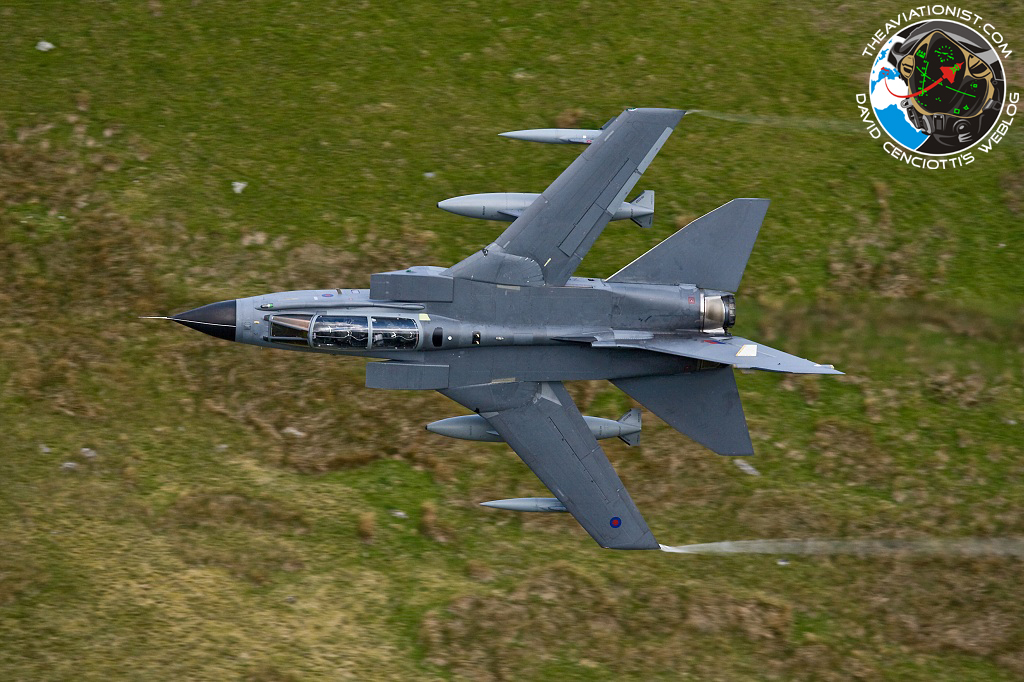 The integration of the HMCS on the Tornado fleet shows that both fighter and bomber combat planes might need to improve their situational awareness and capability to engage ground targets with helmets that project symbology on the visor. However, even if U.S. F-15C/D, F-16  Block 40 and 50 and F-18C/D/E/F pilots use the JHMCS and the F-35 will have a similar helmet, the multirole F-22 Raptor won’t have one.

Here’s what The Aviationist wrote about the lack of helmet mounted display on the F-22 in a previous post about the Eurofighter Typhoon HMSS:

“There are various reasons why the most advanced (and much troubled) air superiority fighter lacks both helmet mounted display and HOBS (High Off-Boresight) weapons: confidence that capability was not needed since no opponents would get close enough to be engaged with an AIM-9X in a cone more than 80 degrees to either side of the nose of the aircraft; limited head space below the canopy; the use of missiles carried inside ventral bays whose sensor can’t provide aiming to the system until they are ejected. And also various integration problems that brought the Air Force to cancel funding.

Did the F-22 need HOBS? Sure, as it would have improved its lethality even further. Indeed, although simulated 1 F-22 vs 3 JHMCS F-16Cs engagements proved that the Raptor can master even challenging scenarios such an extra feature would have been a useful addition when facing large formations of Gen. 5 fighters like the Chinese J-20.”

Last week, while unpacking some boxes I’ve stumbled in my Red Flag Alaska (RF-A) papers. Suddenly, an endless flashback brought me back to that exercise and to an epic transatlantic flight with 6 receivers and […]

Some really cool footage shows the Tornado aircraft in action during their 3-year deployment to Mazar-i-Sharif. For 3 years, from 2007 to 2010, a contingent of six German Air Force Tornado IDS aircraft operated over […]

A RAF Hawk gets a new special tail. A RAF 208(R) Squadron Hawk TMk1 has been adorned with a special centenary painted tail fin to celebrate the 100th Anniversary of the unit. The tail of […]