Notice for my readers: please don’t expect the usual daily updates for the next few days. For sure, I’ll provide new updates after Easter but I’m still deciding if the next will be daily, weekly or random updates every two or three days. Most probably there will be a mix since I think the best way to provide useful and interesting reads is to write a recap or to give an explaination or my point of view when/as soon as there’s something interesting to say or to analyse. Please keep sending me updates, links, pictures and everything you consider interesting and I will try to enrich my debriefs with them.

After all the rest of the world had noticed it from a few weeks, on Apr. 22 even the US Joint Chiefs of Staff, Adm. Mike Mullen has officially acknowledged that the war is moving towards (I would rather say, “has reached”) a stalemate. Even if NATO has destroyed 30 – 40% of Libya’s ground forces nothing so far has proved effective to break the deadlock: neither the Milan ATGMs supplied by Qatar to the rebels (along with some body armour) nor the drones that the US has decided to actively use in theatre. Although important under a military point of view because they ensure that “persistence” on the target area that sometime NATO seemed to be unable to provide, the use of MQ-1 Predators within Unified Protector are even more important because they represent the first sign of a renew American involvement in a difficult war.

Sec. Def. Gates said the aircraft performed their first mission on Thursday but were compelled to return back (to Sigonella) because of bad weather conditions over the target area. Some media speculated that was the very first mission but, as already explained on this blog, it was from more than a week that US Predators had joined US Global Hawks in daily reconnaissance sorties over Libya.

The involvement of US armed Predators over Libya arrived few hours before the news hat two UAVs (most probably MQ-1 Predator, similar to those currently patrolling Misratah skies) had fired 4 missiles against a compound in Spinwam, North Waziristan, Pakistan, killing at least 25 people, including 5 women and 4 children in a nearby house. Although details of such attack were not disclosed (actually, there are no official confirmations of the strike) the unlucky episode, unfortunately not the first to occur along the Afghanistan-Pakistan border where CIA fights militants with drones, sounded as ominous as that “Odyssey” chosen for the Libyan operation name, which foreshadowed a long and difficult campaign. However, it’s worth reminding all those worrying about the accuracy of the “lethal drones” that reports coming from Pakistan’s tribal areas are somehow inaccurate because they are also influenced by the difficulties in distinguishing a civilian from a militant or an extremist, and the dead ones are all referred to as “civilians”. Therefore, not all the Predator attacks in Pakistan kill tens civilians even if, for sure, they can harm civilians in the vicinity of the target, as conventional planes do. 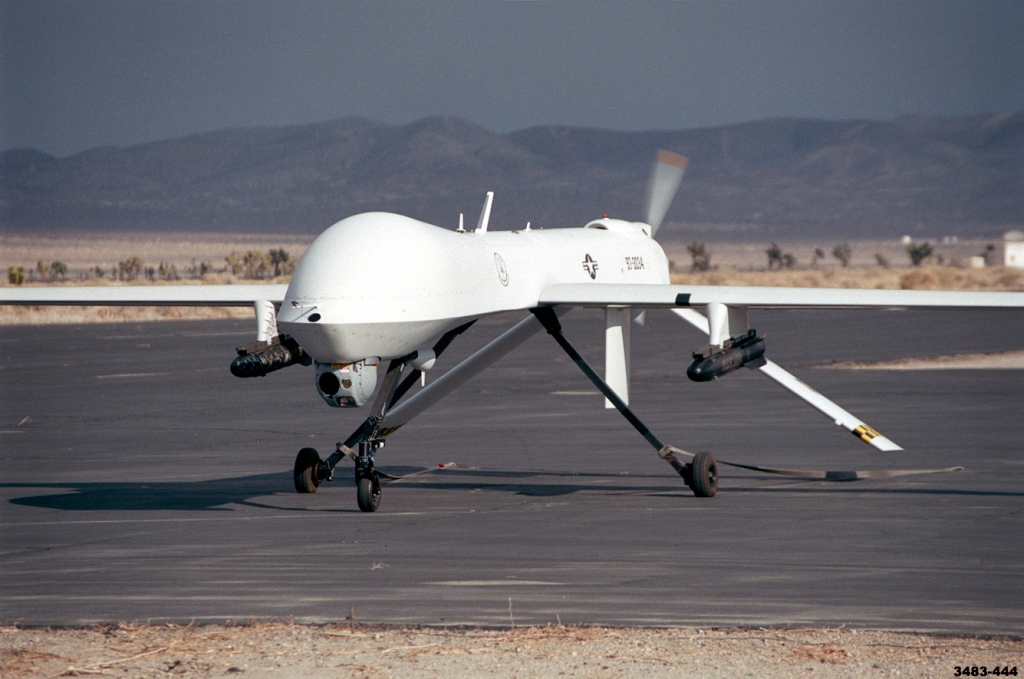 That’s what Vice Chairman of the Joint Chiefs of Staff Gen. James Cartwright said during the Press Briefing with Sec. Def. Robert Gates:

They’re uniquely suited for areas — urban areas where you can get low collateral damage.  And so we’re trying to manage that collateral damage obviously, but that’s the best platform to do that with; their extended persistence on the target — they’re out there for a full day working the targets.

And so you have those capabilities, in addition to being able to get in targets where — out in the open where collateral damage is a worry, for instance, around ammo depots and things like that, that you want to hit — particularly a vehicle but you don’t want to hit the depot and have the secondaries.

By analysing the transcript of the Press Briefing, I’ve noticed that:

If 2 Predators will be constantly orbiting over Libya more than 2 birds are actually deployed to Sigonella as reported by some media. To have 2 Predators CAPping for 24 hours, at least 5 Predators are required at Sigonella airbase.

By the way, Guido Olimpio, the Corriere della Sera’ ( most important Italian newspaper) special correspondent from Washington, expert in international terrorism and Middle East crises, and author of many publications, mentioned me in his article “Usa: useremo i droni armati in Libia”.

The uprising has reached some of the most western villages of Libya. Rebels took over the Wazin crossing near the Tunisian border forcing Gaddafi’s brigades to flee into Tunisian territory. Minor gains have been reported also in the disputed Misratah. Are loyalists suffering supply shortages? Are they preparing some surprise action or is this the effect of the stalemate?

Some tweets on Twitter speculated Gaddafi’s forces were preparing an attack by sea at Misratah, using small boats capable of carrying 15 people. Noteworthy, a new PSYOPS message was recorded on Apr. 22 across Europe, with the usual message inviting, in both American and Arabic languages, sailors and naval officers of a Libyan ship to leave the vessel and return to their families. As explained in Day 11 Debrief that message was heard also before a P-3 attacked and destroyed a Libyan ship (along with A-10s) the were threatening some merchant ships in the vicinity of Misratah port. In this respect, Libyan jamming of the NATO message was recorded by many radio hams: this proves Gaddafi’s forces retains some EW capabilities that, for some reason, NATO has not rendered harmless yet.

Dealing with the air strikes since the beginning of the NATO operation (31 March 2011, 08.00GMT) a total of 3.300 sorties and 1.373 strike sorties have been conducted. On Apr. 21, 152 sorties comprising 62 air strikes. Among targets hit on Apr. 21: 8 ammunition storage bunkers near Tripoli; 1 tank, 1 anti-aircraft gun, in the vicinity of Misratah; 1 military vehicle, near Zintan; 4 tanks, 5 military vehicles near Ajdabiya; 2 tanks, 1 multiple rocket launcher, near Brega; 5 ammunition storage bunkers, near Mizdah; 4 military trucks, around Sirte.

Furthermore, in the last couple of days, France, UK and Italy have decided to despatch small teams of military advisers that don’t constitute “boots on the ground” as their intention is not to be involved in a ground campaign with combat troops but to turn the rebels, that have shown so far limited military capabilities, into a more effective combatant force. Libyan Government has reacted to the decision of Paris, London and Rome’s governments with threatening statements.

1) Guido Olimpio, as already explained above, one of the most authoritative Italian journalists, sent me the links to a series of interesting videos, some of which raise questions about the way NATO has conducted the air campaign so far.
The following video, dated Apr. 17, Al Zintan, shows Gaddafi’s forces shelling rebels almost undisturbed. They are neither hidden nor camouflaged nor operating under the covered provided by bad weather. I checked NATO press releases archive, because I could not remember how many vehicles or rocket launchers were hit by allied planes on Apr. 17: unfortunately, no data was released by NATO for that date….

The following video shows the column moving towards Benghazi on Mar. 18, 2011. This could be the one that was attacked by the French Air Force on Mar. 19 in the beginning stages of Odyssey Dawn. A nice parade of Libyan military equipment.

2) In the last 24 hours, the Italian contingent has launched 7 missions (14 sorties): 3x AV-8B Harriers, 2x Tornados and 2x Typhoons. Most probably Italy has no one available since they are heavily involved in Afghanistan, but what about using one or two of its Predators (based in Amendola) or Predator B (Reaper) to perform some ISR sorties over Libya (saving fuel and flying hours of its tacair fleet that is simply flying orbits to enforce the NFZ)?

3) A RAF Tornado GR4 returning from a Unified Protector mission over Libya was compelled to jettison its fuel tanks before landing in emergency at Gioia del Colle airbase on Apr. 21. The drop were dropped in a field located 500 meters from the runway threshold. Even if the type of failure experienced by the British “Tonka” was not disclosed, many emergency procedures require the pilot to drop the external stores to reduce the aircraft gross weight so it can be landed safely. Tanks are usually dropped also when cockpit instruments indicate an engine fire.

4) Mike, a reader of this blog, sent me the following interesting comment to provide more details about the famous Falcon 900 registered “5A-DCN” used by the Libyan Government (for some background information, read here: “Libyan airspace most interesting movements of last week”).

Hi,
I thought I would give a little background as I formerly worked as a pilot for United Aviation, Libya, the operator of 5A-DCN and others.

United Aviation is a Libyan VIP air charter company based in Tripoli. The aircraft are all based at Mitiga, HLLM. Crews are a combination of Libyan and expats, with most of the Captains being expats from the US. When I was last there almost a year ago, they operated 2 BD-700 Global Express, 1 CL-850 (CRJ200), 1 CL-300,the DA-900 referenced above, and a leased Boeing 707. They may also operate at Lear 60XR and Challenger 605 at this time.

The company is operated as a subsidiary of Afriquiya Airways, the Libyan state-owned airline. They have an operating certificate allowing for worldwide operations under ICAO regulations.

We flew a combination of Libyan cabinet members and African dignitaries to a variety of worldwide destinations. The only thing interesting about the above flight is that 5A-DCN was reserved for the exclusive use of military leaders when I was there. It was crewed exclusively by former Libyan Air Force pilots, and to my knowledge did not participate in the charter operations that the rest of the aircraft were used for.

Getting ready for the Frecce's 50th Anniversary airshow

The following images I took at sunset of Sept. 10 (just a few hours ago) show the MB.339s of the Frecce Tricolori lined up at Rivolto airbase for the night preceeding the 50th Anniversary airshow […]