Once again “stalemate” is the most used term to define the situation on the battlefield in Libya. Misratah is still under siege as Gaddafi’s forces pounded the third largest Libyan city with rocket, mortars and cluster bombs used also on residential areas. Loyalist are attacking food industry plants in Misrata including a dairy as well as a cooking oil one while tanks entered the city pushing civilians closer to the port area. More often Misratah is referred to as a new or mini-Stalingrad after the famous city which saw Soviet troops resisting to the Nazis for almost 6 months in a house-to-house fighting that took place with complete disregard of military and civilian casualties. If that for Stalingrad was one of the bloodest battle in WWII, Misratah is where rebels, outnumbered by pro-Government troops, are resisting from more than 6 weeks of street-fighting.

Insurgents made another effort to push towards Brega oil terminal and 6 were killed and more than 20 wounded when loyalist fired rockets on the rebel vehicles along the coastal highway, from Ajdabiyah westward to Brega. In Ajdabiyah, oppositors said Gaddafi’s forces were positioned in the center of Brega, sometimes inside houses, while rebels were more exposed.

During Day 29, the number of sorties conducted by NATO dropped to 144, 42 of which were strike ones. Since the beginning of the NATO operation (31 March 2011, 08.00GMT) a total of 2.734 sorties and 1.146 strike sorties have been conducted (as always, strike sorties are intended to identify and engage appropriate targets, but do not necessarily deploy munitions each time). I’m still not sure if reconnaissance sorties count as strike sorties or not.
The key targets hit were 2 ammunition bunkers destroyed, one Surface-to-air anti-aircraft site destroyed in the vicinity of Tripoli, 1 Armoured Personnel Carrier destroyed in the vicinity of Misrata, 2 tanks, 2 equipment transporters, 1 artillery piece, 1 tank transporter, 4 ammunition storage sites and one ammunition bunker destroyed in the vicinity of Sirte and 1 ammunition storage site damaged near Zintan.
Considering the type of battle being fought in and around Misratah, isn’t a single APC destroyed not enough to avoid the massacre in the strategic city? 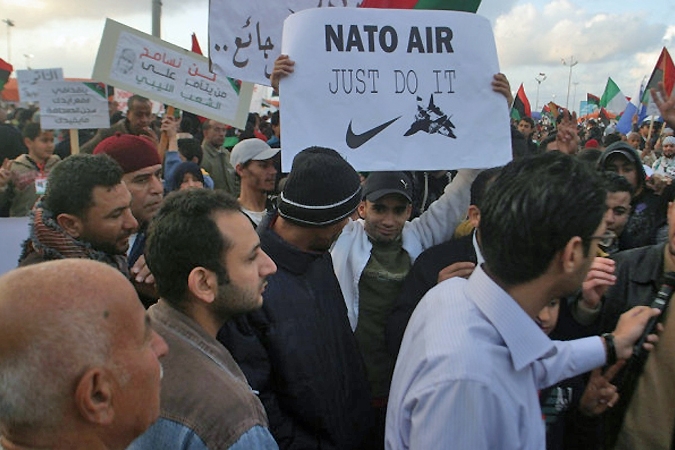 1) Many are still asking why NATO is not doing enough to prevent civilians being literally slaughtered by Gaddafi’ snipers and heavy artillery. According to the Washington Post, one of the reasons is that NATO is running short of PGMs. Below you can find an excerpt of the article:

Less than a month into the Libyan conflict, NATO is running short of precision bombs, highlighting the limitations of Britain, France and other European countries in sustaining even a relatively small military action over an extended period of time, according to senior NATO and U.S. officials.

The shortage of European munitions, along with the limited number of aircraft available, has raised doubts among some officials about whether the United States can continue to avoid returning to the air campaign if Libyan leader Moammar Gaddafi hangs on to power for several more months.

But, they said, the current bombing rate by the participating nations is not sustainable. “The reason we need more capability isn’t because we aren’t hitting what we see — it’s so that we can sustain the ability to do so. One problem is flight time, the other is munitions,” said another official, one of several who were not authorized to discuss the issue on the record.

European arsenals of laser-guided bombs, the NATO weapon of choice in the Libyan campaign, have been quickly depleted, officials said. Although the United States has significant stockpiles, its munitions do not fit on the British- and French-made planes that have flown the bulk of the missions.

But with Gaddafi’s forces and the rebel army locked in a stalemate, Obama has resisted calls from opposition leaders, and some hardline lawmakers in this country, to move U.S. warplanes back into a leading role.

Sen. John McCain (R-Ariz.) and other have called on Obama to redeploy U.S. AC-130 gunships, which are considered more effective over populated areas.

Although the gunships flew several missions early in the operation, Gen. Carter Ham, who commanded the mission before it was turned over to NATO, said last week that they were frequently grounded because of weather and other concerns.

The slow-moving aircraft, which flew as low as 4,000 feet over Libya, are also considerably more vulnerable than jet fighters to surface-to-air missiles. While much of Libya’s stationary air defenses have been destroyed, Ham said Gaddafi was believed to have about 20,000 shoulder-held SAMS at the beginning of the conflict, and “most” of them are still unaccounted for.

Concerns that supplies of jet-launched precision bombs are growing short in Europe have reignited long-standing controversies over both burden-sharing and compatibility within NATO. While allied jets have largely followed the U.S. lead and converted to precision munitions over the last decade, they have struggled to keep pace, according to senior U.S. military officials.

Libya “has not been a very big war. If [the Europeans] would run out of these munitions this early in such a small operation, you have to wonder what kind of war they were planning on fighting,” said John Pike, director of GlobalSecurity.org, a defense think tank. “Maybe they were just planning on using their air force for air shows.”

Despite U.S. badgering, European allies have been slow in some cases to modify their planes and other weapons systems so they can accommodate U.S. bombs. Retooling these fighter jets so that they are compatible with U.S. systems requires money, and all European militaries have faced significant cuts in recent years.

Typically, the British and French militaries buy munitions in batches and stockpile them. When arsenals start to run low, factories must be retooled and production lines restarted to replace the diminished stock, all of which can take time and additional money, said Elizabeth Quintana, an aerospace analyst at the Royal United Service Institute in London.

Correspondent Simon Denyer in Tripoli contributed to this report.

I don’t know which countries are already short of LGBs but most probably among those actively involved in the air strike some might be nearing the end of their stocks. The RDAF alone (one of the most active contingents in Unified Protector) has dropped more than 200 PGMs. If we consider that orders for (quite expensive) ordnance are usually placed by European countries for a few hundred bombs at one time or for quantities lower than 1.000 pieces (as, fortunately, LGBs are not used very often in peacetime), those that are involved in both Afghanistan from some years and now in Libya might be in the need to replenish their stocks in the future, but most probably not yet after just 28 days of operations.

Noteworthy, the article underlines that European air forces should modify their planes to accomodate US bombs even if in most (if not all) cases, US and NATO PGMs (both LGBs and GPS-guided bombs) can be attached to the standard pylons and rails without the need of any modification. For sure there are some weapons that were “locally-developed” and don’t fit with standard bomb racks or suspension lugs but the large majority of the ordnance carried by the aircraft is “NATO standard”, as the extensive use of GBU-12s (described in the previous reports) and GBU-38s shows. 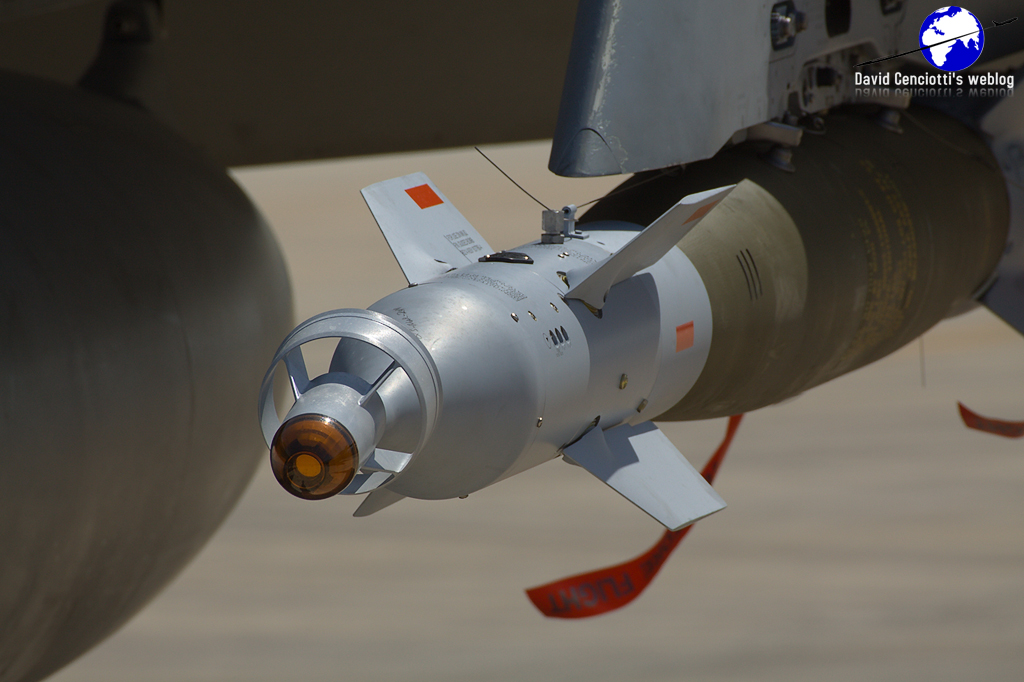 2) The number of Italian missions flown in the last 24 hours dropped to 3, each flown by pairs: 2x AV-8Bs and 1x Tornados (not clear if ECRs or IDSs).

3) A couple of days ago I reported of the speculations about an increased activity of US assets in Aviano. After investigating the rumours, I discovered that activity of US aircraft supporting Unified Protector has decreased. The USN Growlers, as already explained, are flying single ship one sortie per day. The F-16CJs are flying 1 mission per day (2 sorties). On a daily basis, even the RJAF F-16s are flying a single mission with 2 aircraft, lasting on average 5 – 6 hours. Still on the ground, not flying from days, on stand by, there should be no more than 4 F-15Es and 4 A-10s. 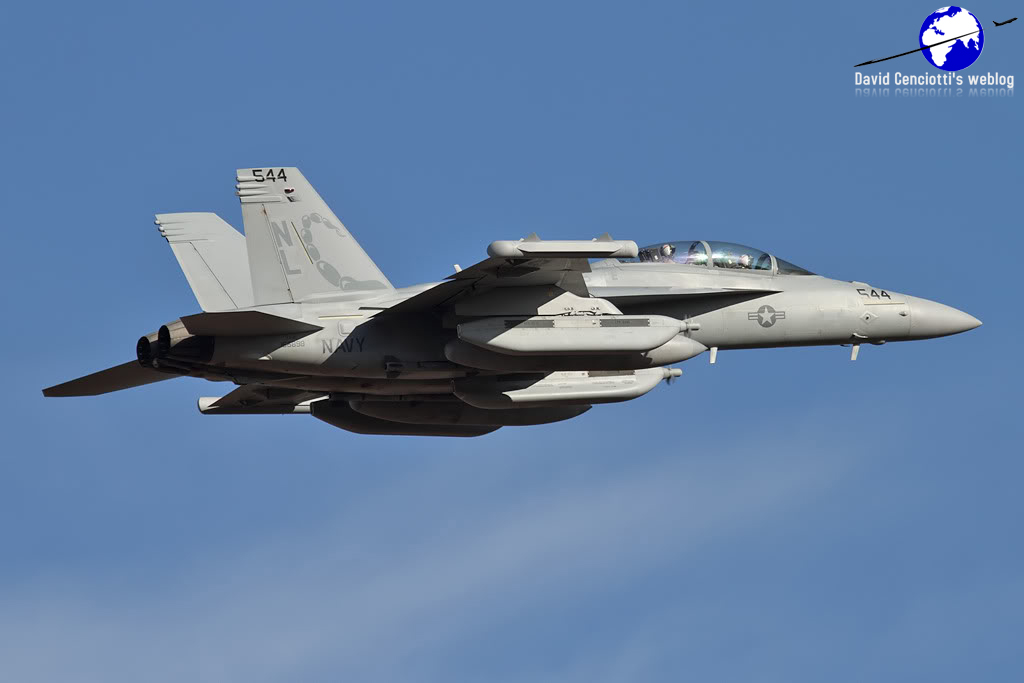 4) Aksel Magdahl informed me that as of Apr. 15, the RNoAF flew 81 missions under Unified Protector (even if it is not clear whether it is a total comprising Odyssey Dawn or just since UP has begun).

U.S. drones and spyplanes involved in information gathering missions over Syria. As in Libya one year ago. More or less…

More or less one year ago, we were observing an increasing activity of U.S., British, French and Italian military spy planes perfoming information gathering missions along the northern border of the Tripoli FIR (Flight Information […]