“We will not take part in the air strikes as Italy is a former colonial power in Libya”. Italian PM Silvio Berlusconi words, backed by similar statements by both the Foreign and Defense Ministers, explained on Apr. 15 the attitude of Italy towards improving its contribution to Unified Protector, the NATO led mission in the North African country. Along with the 7 deployment airbases rendered available to the allies, 12 aircraft and4 ships were transferred under NATO command to enforce the NFZ over Libya and the arms embargo. However, although allies urged other partners to supply more combat planes capable of performing air strikes, Italy ruled out clearing its planes to drop bombs as well as the possibility of assigning to NATO more aircraft. Differently, Italy will also reconsider  its participation in some of the expensive overseas missions, like the one in Lebanon.

It still remains unclear whether the “no clearance to engage” applies also to the Tornado ECRs involved in SEAD strikes or not: considering the suppression of the enemy air defenses a defensive rather than offessive mission, it is reasonable to think that the Italian planes would fire their HARM missiles if needed to shut down a Libyan radar site, otherwise, the number of missions flown by the 155° Gruppo “Panthers” since Mar. 19 would be only an unbelievable waste of money (time, fuel, etc.).

As already explained in the previous Debriefs, Italy was one of the key candidates to increase NATO firepower: the Tornados are already deployed to Trapani, headquarters of the Italian Air Force Task Group Air, to perform reconnaissance and buddy air-to-air refueling, hence there would have been no need to relocate if Italy had decided to contribute with more aircraft.

A similar decision was taken by Spain that has said it doesn’t intend to give its F-18s the order to change their role and to employ its Hornets against ground targets. Other partner that could be called to provide more firepower are the Netherlands and Sweden with the latter already partially involved in the air to ground role with the JAS-39 Gripen (not dropping bombs, but at least identifying targets for air strikes within reconnaissance missions).

While NATO partners discuss if it is better to enlarge the fleet of planes capable of attacking Libyan ground targets rather than supplying rebels with arms, Gaddafi’s forces have intensified their attacks with rockets and heavy artillery on the besieged Misratah where allies performed a few attacks. NATO attacked also Tripoli, striking a missile battery and two other targets in and around the capital city.

1) For the first time, Gaddafi’s forces used MAT-120 mortar-launched cluster bombs which were fired into populated areas. Although not accurate cluster bombs used in Misratah contains 21 bomblets capable of covering large areas (2/3 of a football field) posing civilian under serious risk and, for this reason, they were banned by those nations that ratified the Convention on Cluster Munitions, adopted in Dublin, Ireland in May 2008 (that became International law in 2010). 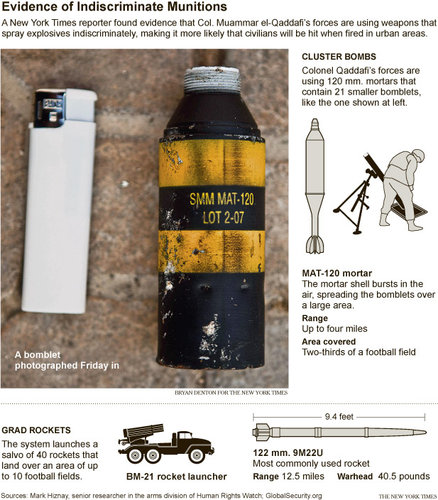 2) According to the BBC, RAF Typhoons were not employed as efficiently as possible because, of the 48 pilots who are qualified on the Typhoon, only 8 can perform ground attacks. “Several other pilots are grounded as they could not make the required number of training hours because of a lack of spare parts for the aircraft”.

French MoD released a weekly update about Operation Harmattan. Since Apr. 7, the French military provides an average of 30 sorties, 120 flying hours a day, half of which are strike missions. These figures represent 20% of the overall NATO flying activity and 25% of all the air strikes conducted within Unified Protector.

Since April 7, 2011, the French military provides an average of thirty times a day, or about 120 hours of flying time, approximately half of the ground strike missions. Ces chiffres représentent 20% des sorties de l’OTAN et 25% des sorties d’attaques au sol. These figures represent 20% of the outputs of NATO and 25% of output ground attacks.

Furthermore, since Apr. 7, the air to ground activity of the French aircraft have neutralized around 20 targets, including 15 military vehicles, 2 SA-2, 5 pieces of artillery, multiple rocket launchers and a piece of anti-aircraft artillery. A command post near Sirte, and an ammunition depot between Brega and Adjabiya were also destroyed.

3) In the last days I explained that the Swedish Air Force was flying reconnaissance with what I thought was a Recce Lite pod. Actually, the one in the pictures was not a Recce Lite pod but a Litening pod: datalink antenna aside (that it is not always present underneath the pod), the two pods, sharing 70% of common parts, are impossible to distinguish each other. 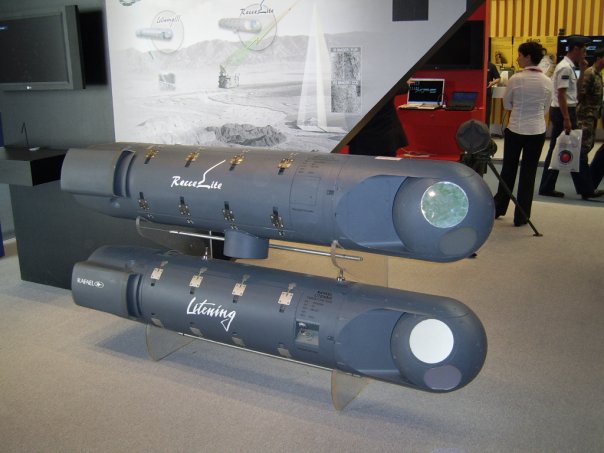 Source: Internet (the Litening and Recce Lite pods. Identical (apart from the data link antenna, that is not always required).

Since the Gripen can carry the Recce Lite and this pod was used for tests in Sweden I thought that was the kind of recce pod used by the Swedish Gripens. However, a further investigation and the help of Karl-Johan Norén (a reader of this blog) and @GripenNews on Twitter enabled me to discover that the one used by the JAS-39 is the large MPRS with Spaningskapsel 39 (SPK39IV).

SweAF released some pictures, reduced in quality of imagery taken by the Gripens of the Okba Ibn Nafa SAM site near Tripoli. 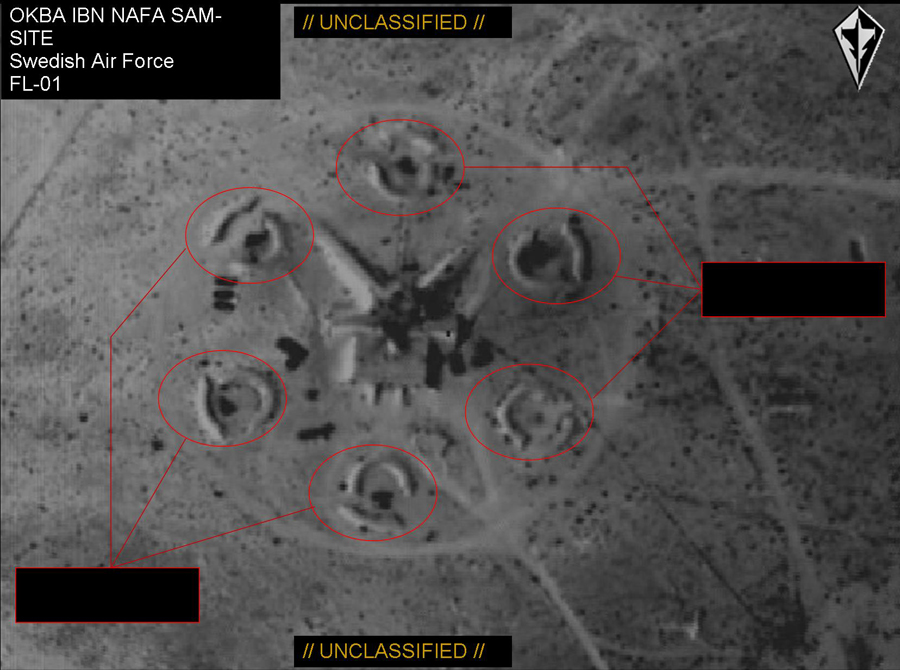 Dealing with the Swedish mission (named Operation Karakal), the aircraft are flying two missions per day; so far 16 missions were flown from Apr. 7 to Apr. 13. The C-130 tanker (Swedish designation TP-84) suffered an engine transmission fault, and also a bird strike during the landing, requiring two days of repairs. 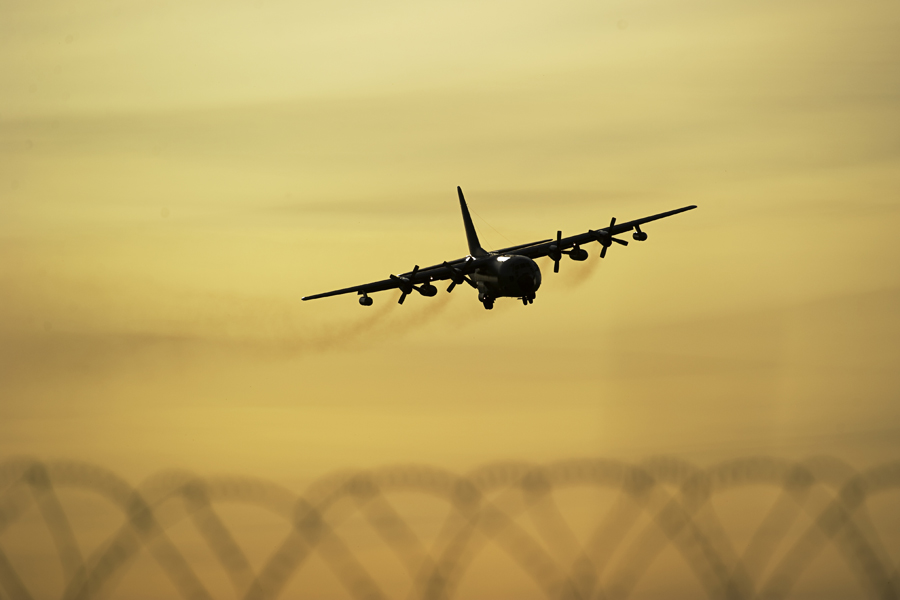 4) Yesterday I published a picture showing a Belgian Air Force F-16 with an LGB of the same type, even in terms of colors, of the one dropped on the rebels on Apr. 7. Jakob Knold noticed the same GBU-12s also on the RDAF F-16 as the following official Royal Danish Air Force pictures show.

5) The RNoAF has conducted 80 sorties dropping more than 100 PGMs Lieutenant, Colonel and senior spokesman John Espen Lien of the Armed Forces Operational Headquarters explained in an interview published on the Norwegian newspaper Dagbladet.
The 6 F-16s deployed to Souda Bay, Crete, are flying 4 to 8 sorties per day. They are mostly engaging ground targets with both laser guided and GPS guided bombs, even if some reconnaissance sorties were flown in the last days. For the RNoAF, that took part in Allied Force in Serbia in 1999, Unified Protector it’s the most intense air operation since WWII.

Filmed in Elgin, Illinois about 40 miles from Chicago, the following video (uploaded to Youtube on May 13) shows what seems to be an MQ-1 Predator drone. Armed with AGM-114 Hellfire air-to-surface missiles. Noteworthy the […]