There are several examples of combat aircraft that were born with the aim to serve in two or three different services of the same nation in aviation history.

Usually, these programs face many problems before they reach their full operational capability and they struggle to satisfy the different customers who put them into service.

This rule is confirmed by the last of these aircraft, the Joint Strike Fighter (JSF) which generated the three different versions of the F-35, as well as an older program, the Tactical Fighter Experimental (TFX), with the USAF F-111A and the US Navy F-111B.

And while the Lightning II is eventually entering the active service in spite of several issues, the F-111 survived only in the A variant while the F-111B, destined to the U.S. Navy, was cancelled.

But among all these programs there has been also a huge success: the so called VAL (with V meaning for heavier than air; A attack; L light) from which the Vought A-7 Corsair was born. 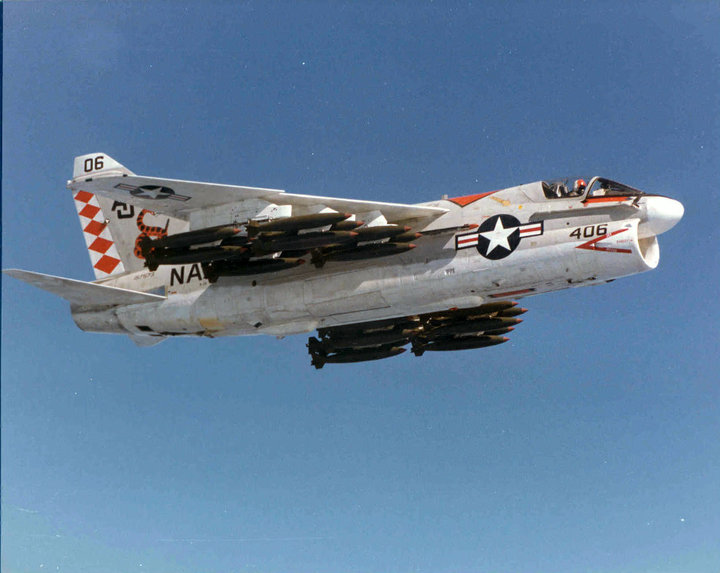 Originally, the VAL was a 1962 joint service program for the development of an advanced light attack aircraft involving USAF, U.S. Army and U.S. Navy.

However the Air Force preferred using its existing fighters for light attack and for close air support and suspended its sustainment to the development of the program.

So the Corsair II became the result of a Navy’s specific requirement to replace the older light attack aircraft such as the AD Skyraider and the A-4 Skyhawk.

Only in 1965 USAF rejoined to the program, developing its all weather version of the Corsair II, the A-7D. This version included advanced flight and navigation displays, one of the first digital computer and also an inertial navigation system. Indeed the A-7D had a truly advanced avionics: it embedded some sophisticated systems, including  the CCIP, the Continuosly Computed Impact Point that gave a real time computation of the weapon release point.

Along with the CCIP there was also the CCRP, the Continuosly Computed Release Point which would automatically deliver the weapon on the target point.

The A-7D  also introduced the BFL, acronym of Bomb Fall Line which showed a “X” on the HUD indicating where the weapon would have hit if the pilot delivered the weapon at that moment.

All these tools were a great help for the development of the Navy A-7E and thanks to the Air Force introduction in the program the Naval Aviation was able to realize its own version of the Corsair II with real all weather attack capabilities.

However the A-7 wasn’t such a revolutionary aircraft like the F-35 is intended to be: in fact the Corsair II was a low risk project since its airframe was similar to the F-8 and was also simpler than the Crusader one.

Still, the last of the Vought naval aircraft achieved some impressive milestones such as accomplishing its first flight on Sept. 27, 1965 ahead of the schedule and the first training example of the aircraft was delivered to the Navy in November 1966. 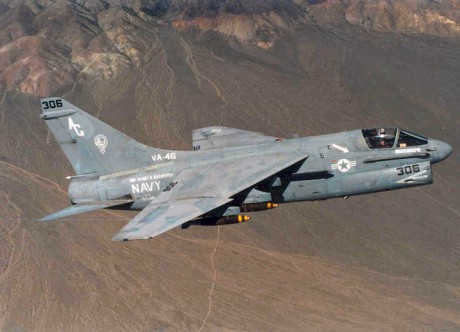 The A-7 didn’t face high cost overruns and the airplane was also able to respect the maintainability requirement with only 17 maintenance man-hours per flight hour.

Nevertheless the A-7D/Es were some of the first combat aircraft to be equipped with the Head Up Display.

Thanks to the help that every service gave each other, the Corsair II was able to satisfy its customers and become an attack platform with capabilities which they didn’t have anywhere else.

Maybe the story of the A-7 should guide the Joint Strike Fighter: a program not only affected by schedule slippage and cost overruns but that also a plane that risks to fail to meet some of its customers’ requirements.

The Aviationist visits the 4th FW at Seymour Johnson AFB to report on “Razor Talon,” a monthly large force exercise sponsored by the USAF. Razor Talon is a monthly aerial warfare exercise that represents a […]

A U.S. Navy Destroyer Has Shot Down an Incoming ICBM For the First Time.