A new “forensic animation”, made by Eyewithness Animationas and published by several media outlets, provides the most detailed and realistic look (in terms of airspeeds, altitudes, etc. ATC audio recordings are not synchronized), of the crash landing of Asiana Air 214 at San Francisco.

The animation is particularly interesting as it also shows the path the plane should have taken and the path it did take as it crash landed on runway 28L at KSFO on Jul. 6, 2013.

The animation shows the plane getting below the glide path and the pilot pulling up when it’s already too late to recover: the main landing gear hits the sea wall and the tail detaches from the plane.

Then, the left engine breaks away from the wing and the plane becomes airborne once again as it yaws and slides on the grass.

Even if all new aircraft seats are designed to withstand 16g forward, 16 forward at 10 degrees and 14g down, many passengers flying in economy class suffered spinal injuries: unlike business class section passengers, who had harness seat belts that prevented such injuries, passengers in the back had only lap belts, hence they slammed their heads into the seat in front of them.

Still, the aircraft did not capsize, otherwise very few passengers would have survived.

The scene of the aircraft about to hit the sea wall with the gear reminds the following famous U.S. Navy photo, showing Lieutenant Tom Reilly, a Landing Signal Officer (LSO), racing across the deck to avoid an approaching F7U-3 Cutlass about to crash on the Hancock aircraft carrier on Jul. 14, 1955. 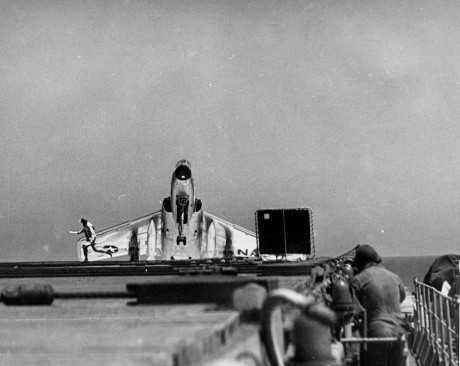 A Malaysian Airlines Boeing 777 from Amsterdam to Kuala Lumpur crashed in Ukraine near the Russian border after being hit from a surface to air missile. A Boeing 777 (9M-MRD) with 280 passengers and 15 […]