As we described it earlier, a new era in carrier based aviation has started when the X-47B Unmanned Combat Air System (UCAS) demonstrator completed its first-ever carrier-based arrested landing on board USS George H.W. Bush (CVN 77) off the coast of Virginia.

Noteworthy, after completing a second autonomous arrested landing on the carrier, a third landing was aborted as the X-47B self-detected a navigation computer anomaly and diverted to a landing field.

According to the Navy, the UAS (Unmanned Aerial System) was about four miles aft of the ship, with arrestor hook and landing gear down, when one of its health check on its subsystems revealed a computer anomaly.

Hence it decided, without any human intervention, to wave off (meaning to abort the landing attempt), flew past the carrier and reported the problem to the remote controllers who directed it to a shore landing airfield. 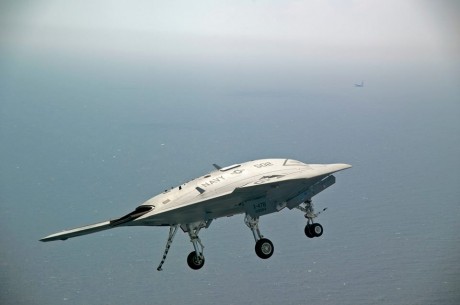 Two things are worth a mention.

First, the new U.S. Navy’s killer drone detected a problem and made the proper decision before the humans discovered it, improving the mission safety.

Second, what if the drone had autonomously made the wrong decision?

German Heron Drone Hacked and Crashed by Taliban in Afghanistan

In previous article about a German Heron drone that crashed into a C-160 at Mazar-i-Sharif in 2010, we reported the harsh comments by Bild newspaper that defined athe German Army experience with drones in Afghanistan […]

Iraq’s Navy has already purchased U.S. drones to protect its southern oil platforms, from where most of the OPEC nation’s oil is shipped. This is what an official from the Office of Security Cooperation in […]