Aeroflot 150 is a scheduled flight from Moscow, Russia, to Havana, Cuba.

It is flown by an Airbus A330 and, as any scheduled commercial liner, unless something very special happens, it always takes the same route to Cuba.

However, on Jul. 11 it flew a different route, a southern route that completely avoids the U.S. airspace (for the history of such flight in the last weeks take a look here). Furthermore, AFL150 is the same flight believed to be carrying the NSA leaker Edward Snowden a couple of weeks ago, when some journalist boarded the plane to find the accused spy’s seat empty. 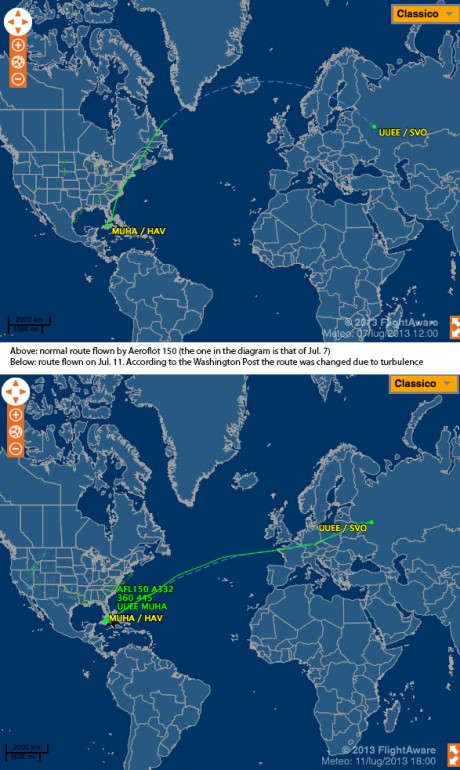 Even if such a significant change of route is at least unusual, it might be explained by the bad weather affecting U.S. East Coast.

At the time of writing, the aircraft is about to land at Int’l José Martí airport in Havana. If Snowden is on board, we’ll know very soon.

An impressive set of photographs shows a new Airbus A330 of Afriqiyah Airways airline being destroyed by fire at Tripoli International Airport. On Jul. 20, a brand new, empty Airbus A330-200 (with registration either 5A-ONH […]

Russian Radars back to Cuba

Putin is about to reactivate a Russian radar reconnaissance center in Cuba. The radar station is to use the existing infrastructure located just 100 miles off the coast of Florida used by the Russians until […]