After a series of blue-water ops, including touch and gos and catapult launch, Jul. 10, 2013 will be remembered as the historic day when manned and unmanned aircraft were integrated on the deck of an aircraft carrier.

“We have certainly come a long way in the 102 years since Eugene Ely made the first arrested landing aboard an aircraft carrier. Naval aviators have always been at the forefront of operational and tactical innovation, and today was no exception,” said said Secretary of the Navy Ray Mabus. 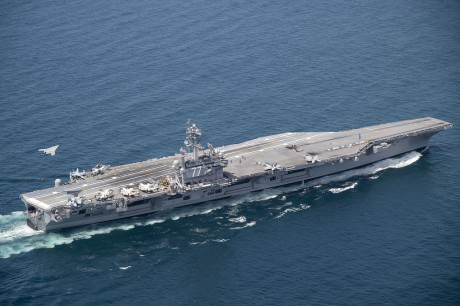 Black Eagles return home from WESTPAC and Liberty Bells relocate to new home at Point Mugu. With some cool special markings. On Jun. 21, 2017, NBVC Point Mugu saw the homecoming of the VAW-113 “Black […]

A high speed low flyby causes an unexpected side effect on the shore. Filmed on the shore at Pensacola Beach, Florida, the following video shows Blue Angels #5 perform a low flyby during the airshow […]