A new era for naval aviation has just begun.

On May 14, the US Navy successfully launched the Northrop Grumman X-47B unmanned combat air vehicle (UCAV) off the deck of an aircraft carrier for the first time. A breakthrough for robotic aviation and military Implementation of unmanned systems.

The video, just released by the U.S. Navy shows the X-47B Unmanned Combat Air Systems (UCAS) demonstrator – please note that both UCAV and UCAS acronyms are used for this drone, being taxied and then catapult-launched from the flight deck of USS G. W. Bush. 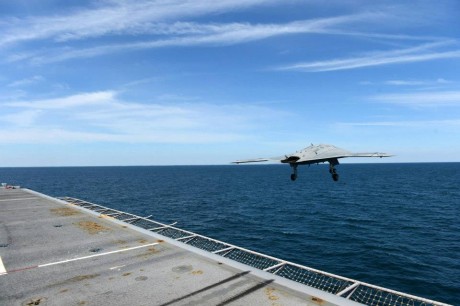 The new gadget is a special remote control for moving the X-47B on flight decks which attaches to the wrist, waist and one hand. Through the device, deck operators ahve access to a display and  can control the aircraft’s throttle, tailhook, steering, brakes and perform several other functions associated with maneuvring an aircraft on deck.

The facility is not mission capable but there are no details yet on the damage caused by the earthquake. Following last week’s earthquakes up to 7.1 magnitude in the Ridgecrest area, Rear Admiral Bette Bolivar, […]

Watch An Iranian F-4E Phantom Do A Roll Near A U.S. Navy F/A-18E Super Hornet During A Close Encounter

An Iranian Phantom performs what loosely reminds a Top Gun stunt while “intercepting” an American Super Hornet. We don’t know when nor where this was filmed, still the footage, reportedly shot from an Iranian Phantom’s […]