Last week the Norwegian Crown Prince visited Lockheed Martin’s Ft Worth facility as part of an effort to promote Norwegian industry within the JSF-program.

As part of the visit, LM fitted an F-35A with two externally mounted development models of the Joint Strike Missile. 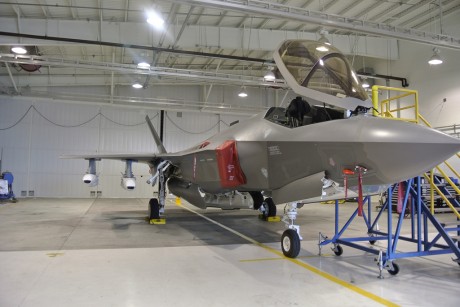 Unveiled on Nov. 29, 2012, the Joint Strike Missile (JSM) developed for the F-35 by the Norwegian company Kongsberg and the Norwegian Ministry of Defence, is the only powered anti-ship missile that can fit inside the F-35’s weapons bays.

Actually, even if carrying the missiles on the underwing pylons would cost the JSF its stealthiness, the F-35 can carry up to six (2 in the internal bays, 4 on the external pylons) JSMs; previously, only 2+2 were believed to be theoretically carried by the 5th generation multirole radar evading plane,

Derived from the Naval Strike Missile (NSM), the anti-ship weapon, featuring long range, low radar cross section and high maneuverability, speed and accuracy, will undergo a Critical Design Review in summer 2013: the CDR will confirm whether the design is mature enough to be able to continue the integration on the F-35.

A new video provides a glimpse of the 6th Gen. fighter concept that could replace the F-22. But it’s probably not the real one… A short clip just released by the Lockheed Martin’s Skunk Works […]