According to Reuters, one of two F-35 stealth fighters one their way to Nellis Air Force Base, where the first two aircraft were taken on charge by the 422nd Test and Evaluation Squadron last week, was forced to perform an unscheduled landing in Lubbock, Texas, on Mar. 11, 2013.

The Joint Strike Fighter was flying from Lockheed Martin facility in Forth Worth, to the Nevada airbase near Las Vegas, when a caution warning light came on, requiring the pilot to divert and land at the nearest airfield.

The F-35A Conventional Take Off and Landing (CTOL), landed safely, while the second plane continued as planned to its destination.

Lockheed experts were immediately dispatched to the Texan airport, located about 300 miles  from Dallas, to assess the situation and identify the cause of the caution light.

Although emergency landings are quite usual in military aviation (or, at least, not rare), the fact that a costly F-35 was forced to land because of a possible failure in one of its systems, does not necessarily mean the aircraft is unsafe or a total waste of money (as some, many, believe).

Still, the mishap is the latest in a series of negative news regarding the Pentagon’s most expensive warplane (grounded twice this year for engine problems) and for this reason, even what can be considered a normal incident, makes the news. 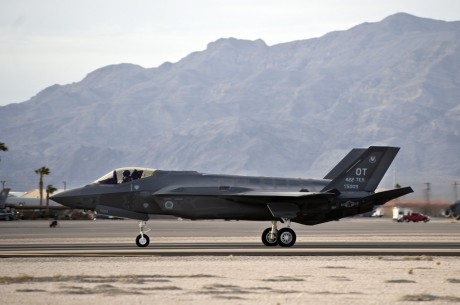 Aircraft Photographed with Smoke from End of Runway. Crew Reported as Uninjured. A Royal Australian Air Force (RAAF) EA-18G Growler electronic warfare aircraft is being reported as damaged in an incident that occurred at 10:45 […]