In a recent post, we have explained that a recently leaked Pentagon report highlighted the poor “out-of-cockpit visibility in the F-35A”, a shortcoming that would limit the pilots ability to see aerial threats surrounding the plane putting the costly 5th generation plane at risk.

The problem would lie in the large head rest that impede rear visibility and the ability of the pilot to check the aircraft’s 6 o’clock for incoming aerial or surface threats. 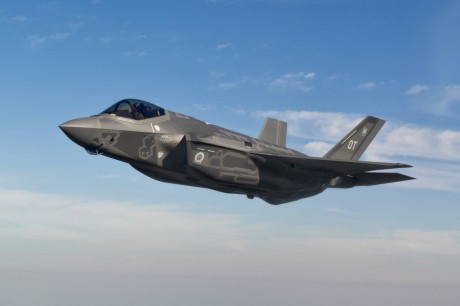 Many readers have argued that the limited rear visibility is no big deal for a modern aircraft equipped with sensors capable of detecting threats coming from any direction.

Although it is quite true that the F-35’s sensors equipping the aircraft (at least when it will get most advanced software configurations) would probably be able to spot any aircraft attempting to get on the aircraft’s tail, no matter where the pilot is looking, we can’t completely rule out the possibility that the pilot will have to turn is head rearwards to visually ID a plane approaching fast from 6 o’clock.

A Joint Strike Fighter pilot could be forced to look towards the tail to check the smoke of an incoming SAM (Surface to Air Missile) and perform the proper evasive maneuver, or to look for an incoming hostile stealth fighter (for instance a Russian or Chinese one) detected by the onboard Distributed Aperture System (DAS) close to “the merge”.

In a Within Visual Range scenario (no matter how likely it is for a stealth plane), the ability to check their six can make the difference between death or survival. That’s why visibility is important regardless the capabilities of the defensive suite.

Still, it must be said that, as soon as (if?) all the problems with the devices are solved, wearing their Helmet Mounted Display System Gen. II, that fuses all the information coming from the plane’s sensors along with imagery fed by a set of cameras mounted on the jet’s outer surfaces, providing a X-ray vision-like imagery, F-35 pilots will be able to check their six, head rest or not.

Starting in 2017, Australia will host U.S. military aircraft, including F-22 Raptors, to maintain a “credible combat power” in the region and send a convincing message to potential aggressors. The Royal Australian Air Force will […]