The Distributed Aperture System (DAS)  is going to be one of the key sensors of the F-35 Lightning II Joint Strike Fighter. 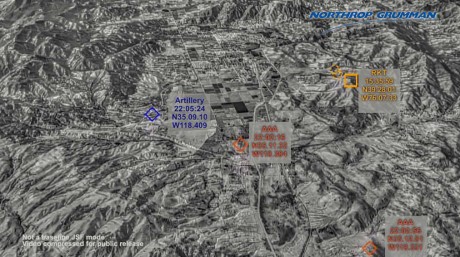 In fact, during a test flown on Northrop Grumman’s BAC 1-11 test aircraft, the F-35’s DAS detected and located tanks that were firing live rounds during a military exercise. Hostile fire detection makes the aircraft capable to simultaneosly detect and pinpoint anti-aircraft artillery and rocket fired in a wide area: the location from where the hostile fire originates can be gathered and then shared with ground forces, other aircraft or simply used to deliver with GPS precision some air-to-surface weapons.

Designated AN/AAQ-37, the full EO DAS suite comprises six electro-optical sensors, that will not only warn the pilot of enemy planes, missiles, AAA, but will also provide day/night vision, support the various navigation function of the F-35’s forward-looking infrared sensor, and precision tracking of nearby friendly traffic for tactical maneuvering.

According to Reuters, one of two F-35 stealth fighters one their way to Nellis Air Force Base, where the first two aircraft were taken on charge by the 422nd Test and Evaluation Squadron last week, […]

The U.S. Air Force has revealed the first image of its future Long Range Strike bomber: the B-21