The International Defence Exhibition and Conference (IDEX) in Abu Dhabi, UAE, has been the stage to announce a brand new Italian unmanned aerial system (UAS).

Although no specific details have been release on the topic, it’s quite unlikely the aircraft will be able to carry any weapon. 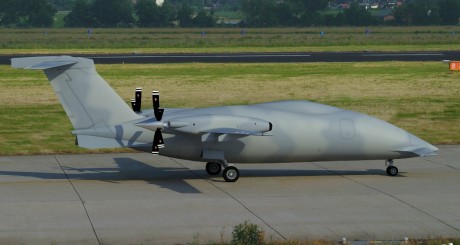 The P.1HH UAS has already conducted a first engine start and runway taxi testing on an Italian airbase on Feb. 14 and will make its first flight during the year.

Unlike most drones, that are quite ugly because of shapes needed to enhance their endurance (long wings, small undercarriage etc.) and the array of sensors and other equipments that make their shape quite “bumpy”, the “HammerHead” has the distinctive features of the Piaggio P-180 Avanti, the twin-engine turboprop plane on which the new UAS is based.

Both aircraft feature an aerodynamic fuselage, small forward wings (similar to canards), engine in pusher configuration and a high horizontal stabilizer on the tail.

The P.1HH is capable of flying up to 45,000 feet with an endurance exceeding 16 hours. The UAS includes a ground control station that can be interconnected with the drone in Line of Sight or via satellite (Beyond Line of Sight).

So, don’t you think the P.1HH is quite beautiful, especially if compared to a Predator or Reaper?

Ok, payload is more important than look, but that’s another story….

That’s a weird way to move a U.S. Navy drone copter: MQ-8B Fire Scout spotted on a trailer on Interstate 405

An MQ-8 Fire Scout was spotted on a trailer on I-405 at Newport Beach, California Few months ago we published an image of an MQ-8C Fire Scout, the UAS (Unmanned Aerial System) obtained by giving […]