Iran has just released footage that proves it has, if not literally decoded, at least accessed some of the data stored inside the U.S. stealthy RQ-170 drone captured in December 2011.

The video, that was aired by an Iranian TV, as part of an interview in which Sardar Hajizadeh, the Commander of the Islamic Revolution Guards Corps (IRGC) Aerospace Forces, tells how the drone was captured and how its technology was successfully accessed and decoded, is the first evidence Iran has found something interesting in the unmanned aircraft’s intelligence gathering sensors and internal hard disks.

So far, Iran claims were never backed by evidences: some blurry details about its activity in California and Afghanistan and some unrelevant information; data that could be retrieved with a little of OSINT (Open Source INTelligence) and some spying.

Now, the new video clearly shows footage recorded by the drone underbelly camera: the area surrounding Kandahar airfield (KAF) as the RQ-170 is about to land, a small building (possibly being spied), a C-130 and at least one Reaper drone among shelters at KAF.

Nothing really special, still something that clearly shows Iranians did find something inside the Sentinel and were able to extract and decode it.

Hence, the drone’s internal memories still contained some useful information and were not fully automatically erased as a consequence of the loss of control procedure. To such an extent data, including video recordings from the drone’s FLIR turret, was recovered.

Noteworthy, some still images (that you can find in the longer video here below) show the drone immediately after being recovered in the desert and, later, moved with a helicopter sling load.

How the “Beast of Kandahar” crash landed in Iran remains a mystery: Tehran claims it was hacked, but the stealth drone, undetected by any radar, might have crash landed for a failure somewhere in eastern Iran where it was found (possibly by accident). And where the U.S. could not blow it up. 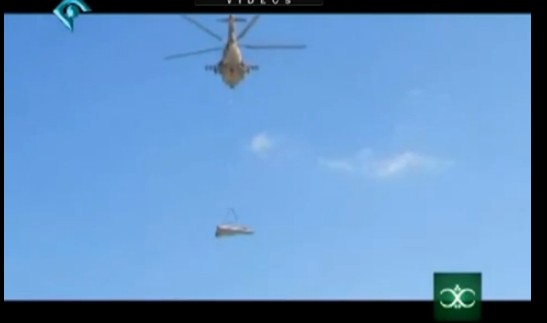 US Civilian Cargo Plane crashes after taking off from Bagram, Afghanistan

On the afternoon of Monday Apr. 29 a civilian Boeing 747 cargo plane taking off from Bagram Air Base, Afghanistan, crashed killing all on board. The doomed B747-400 cargo plane was operated by National Air […]