Although the oddities of the Qaher 313 or Q-313 or F-313 have been already listed in the article “Iran unveils new indigenous stealth fighter “Qaher 313″. And here’s a detailed analysis” many of the readers of The Aviationist have requested to recap them in a new post.

Hence, here below you can find all the reasons why we can affirm that Iran’s new stealth plane, at least in the form that was showcased on Feb. 2 during the Ten-Day Dawn ceremonies held in Tehran, is nothing more than a mock-up.

The size of the plane is weird. The cockpit seems to be too small, to such an extent a normal pilot doesn’t properly fit in the ejection seat. Have you ever seen a pilot with his knees above the side borders of the cockpit and his helmet well beyond the ejection seat’s head pad?

The general shape of the plane is interesting, probably the result of many inputs including the X-32, the X-36, the Boeing Bird of Prey. Still, wings with outern section canted downward seem to be a bit too little to sustain the weight of the aircraft, especially the “adveniristic plane” is intended to carry a powerful engine and internal payload

Overall, the plane seems to lack the characteristic rivets, bolts all aircraft, including stealthy ones, feature. Images released so far show it as a plastic-made aircraft

The engine exhaust misses any kind of nozzle. The use of afterburner (or, simply, the engine temperature) would possibly melt the entire structure of the jet

The aircraft sports fixed canards and air intakes a bit too small to feed a modern jet plane’s engine; air intakes resemble those used by modern UCAV designs. They are located above the wing meaning that at high AOA (Angle Of Attack) the intakes would  get turbulent or no air at all for the engine.

The cockpit is too simple: the front panel lacks the typical wiring while it features few instruments of a type you expect to find on small private planes. Some readers have noticed the airspeed indicator is limited to 300 MPH.

The nose and main landing gear seem not to be retractable (although the hinge mechanism could be hidden by the door bay). Someone has pointed out the landing gear bays dimensions are such to be unable to accommodate the stowed gear but I found no way to verify this theory

The flying aircraft shown in the video released yesterday is a radio controlled model (but, it looks like Iranian media outlets have already confirmed this).

Some Iranian readers have said the F-313 is not intended to be an actual plane but a drone. Maybe.

Still the aircraft, manned or unmanned, as displayed on Feb. 2 will hardly take to the air unless extensive modifications are made. 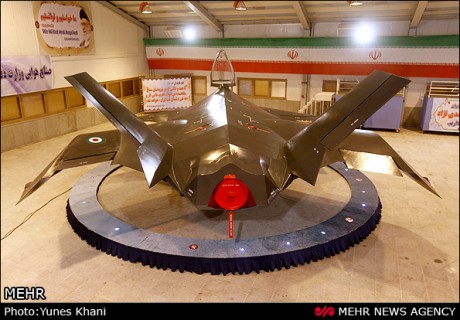 Mystery drone emerges from the sea in the Gulf of Oman. American, Israeli or …. Iranian?

The following image shows a drone reportedly recovered by the Army of the Guardians of the Islamic Revolution from the sea in the Gulf of Oman, near the port of Jask, Iran. The mysterious UAV […]

On Sept. 25, Iran unveiled two new domestically produced air-to-surface missiles: the Qader and Nasr. Whilst Nasr is a short range missile, Qader, derivative from Chinese C802 supersonic ASM (Anti-Ship Missile), is believed to be a […]