On Feb. 4, a couple of days after the entire world highlighted the oddities of the first prototype of its Qaher 313 stealth fighter jet and the reasons why the F-313 will never get off the ground, the Iranian MEHR News Agency published an article to explain the aircraft’s top features.

The F-313’s top 10 features piece addresses some of the doubts surrounding the Qaher and its ability to fly and are aimed to persuade skeptics that Tehran’s new aircraft is not only airworthy, but it is also “one of the most sophisticated fighter jet in the world,” as Ahmadinejad said.

Here below you’ll find a long excerpt of the MEHR article:

The top 10 technical characteristics of the F-313 fighter jet and some of the related data on its features and appearance:

1- Using Two inlets and inlet ducts make up the air induction system to deliver air to the engine. Due to an indirect angle of the engine to the air inlets, the radar reflectivity is reduced, and it makes angled design of inlet ducts to the surface to get radar energy wave, just like in F35.

2- The hot exhaust gas mixes with cold air through the inlet ducts, and gets cooler before it gets out of the exhaust system, to reduce heat effects on the surface of the aircraft.

3- Use of radar-absorbent materials in the body, to absorb wave energy and reduce radar reflection, for greater stealth effect of Qaher F-313 fighter.

4- Considering the estimated length and height of the aircraft is less than 16 and 4 meter, the two compartments with payload capacity of carrying two 2000 pound bombs, or greater number of smaller smart guided missiles, or at least 6 air-to-air missiles in the category of R-17 or PL-12.

6- The very large canopy gives a 360 degree visibility, which is essential for low altitude fly-by flights, especially helps ground mission attacks, and it is also very useful in close dog-fights.

7- The angled wings is perfect example of indigenous design for aircrafts, which gives a side profile like M, and similar to a W profile, is the best form to use in aircrafts.

9- There are 8 analog displays in the cockpit, which shows Multi-Function Display (MFD) technology has more room to improve in F-313, Qaher fighter jet.

10- Considering F-313 normal steering lever, the control systems, with the wing movable surfaces, rudder, and vertical stabilizer are hydraulics, and not fly-by-wire (FBW) system, since many today’s aircraft use “side-steering lever” control.

The advance computer designing software (CATIA) were used for designing F-313, and aerodynamic analysis methods such as computational fluid dynamics (CFD) also were used, with the help of numerical grid generation software (GAMBIT), flow analysis software (FLUENT) and other design computation software, which shows a complete scientific work in various areas of indigenous scientific and technology was used for F-313.

These 10 features don’t change what already written about this odd plane. I still believe it can’t fly as it is today. 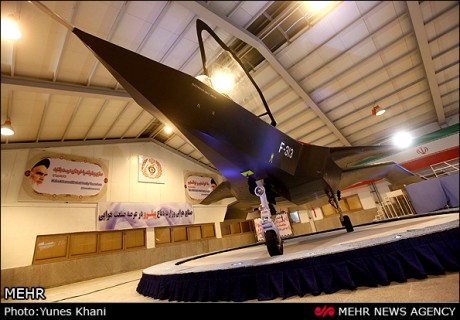 On Feb. 2, Iran unveiled a new stealth plane dubbed Qaher 313 or F-313. Even if its shape is quite peculiar and its design shows inputs from past and current radar-evading projects (including the X-32, the […]

Heavy fog forced the F-35 to the ground, delaying the arrival of the first “Adir” jets in Israel. Not a good start, on the very same day Trump slammed the program’s cost for being “out […]

U.S. Air Force B-52H Stratofortress strategic bombers from Minot Air Force Base have conducted a surprise, round-trip to the Persian Gulf area “to deter aggression and reassure U.S. partners and allies”. On Nov. 21, 2020, […]