Even if most combat planes wear overall grey colors, camouflage color schemes can still prove to be important for survival in certain scenarios, both in the air and on the ground.

The following image shows a C-130 belonging to the 356 MTM (Tactical Transport Squadron) of the Hellenic Air Force flying with another plane of the same type, wearing the typical camouflaged color scheme still used by many Greek planes. 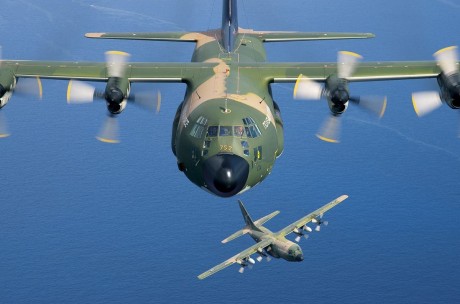 Although the aircraft can’t mask themselves against the blue sea in the background (a light grey color scheme would make them only slightly less visible), the exotic livery makes them particularly photogenic.

As already explained, even in the hi-tech age of stealth bombers, low-level flying is still one of the most important parts of combat pilot training. The fact that some recent scenarios give combat planes the opportunity […]

We have already published some pictures, taken by The Aviationist’s contributor Tony Lovelock at Nellis AFB, Nevada, of the F-15C of the 65th AGRS (Aggressor Squadron) with a new “splinter” camouflage probably inspired to the […]