According to a FARS News Agency article published on Apr. 22, Iran has just finished deconding the intelligence gathering sensors and the internal hard disks of the U.S. stealthy RQ-170 Sentinel drone that was captured by Iran in December 2011.

Speaking to FNA, Commander of the Islamic Revolution Guards Corps (IRGC) Aerospace Forces Brigadier General Amir Ali Hajizadeh revealed some data taken from the aircraft’s intelligence system to deny claims by the Pentagon according to which the Iranians would not succeed in decoding the spy drone’s memory and intelligence devices.

The drone parts had been transferred to California for technical works in October 2010, adding that the drone was later transferred to Kandahar, Afghanistan in November 2010 and had a flight in there.

The commander said that the drone had experienced some technical flaws in its Kandahar flight in November, but the US experts failed resolve the problems at the time.

Hajizadeh added that the RQ-170 was then sent back to an airfield near Los Angeles in December 2010 for tests on its censors and parts, adding that the drone had a number of test flights in there.

As a forth cue to prove Iran’s access to the drone’s hidden memory, the commander mentioned that the spy drone’s memory device has revealed that it had flown over Al-Qaeda Leader Osama bin Laden’s hideout in Pakistan two weeks before his death.

According to Haiizadeh,  “Had we not accessed the plane’s soft wares and hard discs, we wouldn’t have been able to achieve these facts”.

Although it is possible that the RQ-170’s internal memories were not successfully wiped out following the loss of satellite link with the drone giving the Iranians the chance to decypher some of the data collected by the drone the four “cues” provided by the Iranian General are not solid.

The same information could be retrieved, if not on the Internet (the fact that the “Beast of Kandahar” has tanken part to the Operation Neptune’s Spear to kill Osama Bin Laden was very well known since May 2011) with a little of OSINT (Open Source INTelligence) and some spying.

Aviation magazines have published pictures of the RQ-170 at Kandahar showing some modifications (obviously applied in the US) and by simply observing the drone at Kandahar before and after the new equipment was installed could be a sign of stateside work.

Hence, unless something more solid emerges, I think it’s quite unlikely that the internal memory contained useful information:  they were (probably) automatically erased as a consequence of the loss of control procedure and data will never been recovered. However, the circuitry, lenses, memories and sensors are still there and can be evaluated, tested and copied. And, maybe, improved, with the help of some interested third parties (Russia and China). 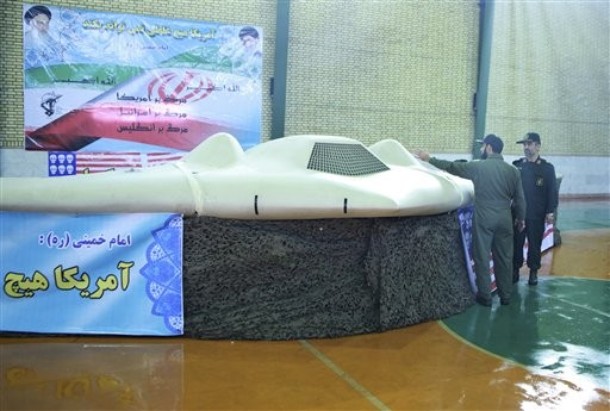 On Feb.11, a model of the U.S. stealthy RQ-170 drone captured on Dec. 4, 2011, was displayed at Tehran during the pro-government rallies marking the 33rd anniversary of the victory of the Islamic Revolution. According […]

Here they are. The first images released by an Iran news agency of what should be the U.S. RQ-170 drone crash landed in Iran on Sunday. Noteworthy, the drone wears a sort of desert color […]