So far, with the help of Ugo Crisponi, I’ve been able to offer my readers a possible view of the Stealth Black Hawk involved in the Osama Bin Laden’s raid. However, although I’ve already underlined since my very first post on this topic that there MUST be much more flying assets involved in the complex mission, I think that it could be interesting to draw a possible “picture” of all the aircraft taking part in Operation Neptune’s Spear. This is obviously just one of the ways to piece facts together but it seems to me the more reasonable for a series of things I’ll briefly discuss. First of all let me stress a concept: the Stealth Black Hawk that crashed in the OBL (Osama Bin Laden) compund was not so stealth to be completely invisible. Indeed, to answer again to my famous Twitter friend @PrimorisEra (for an interesting comment on her intriguing “saga”, read here): I agree, no aircraft can achieve complete stealthiness; choppers in particular, with all those rotating parts, are not so easy to hide to radars.

Not being completely radar-evading, the choppers (I believe more than 2) were covered by some EW platforms, probably in the form of either EA-6B Prowlers from USS Enterprise or EA-18G Growlers from USS Carl Vinson, both currently in the North Arabian Sea. I’m pretty sure that a US supercarrier in the area played an important role in the entire operation: being involved in Operation Enduring Freedom, it launches on a daily basis its assets belonging to the Carrier Air Wing along the Transit Corridors to Afghanistan. Any activity along the TCs across Pakistan would appear absolutely normal to the Pakistani controllers. For the same reason, it is possible that at least an E-2C Hawkleye and a pair of Super Hornets (F-18E or F) launched by the Big-E were used to provide respectively AEW (Airborne Early Warning – air space management) for the entire operation and DCA (Defensive Counter Air): the mini-AWACS could detect any Pakistan AF fighter being scrambled against the formation of helicopters bringing the US Navy Seals to Abbottabad and the “Rhinos” could be directed against the interceptors to provide cover.

As said, this is obviously just one of the possible descriptions of the mission. If I’ve missed something or if you think something must be fixed, just let me know. Even if I can’t be sure on the actual number of involved aircraft, I’m more than sure it was an extremely complex operation! 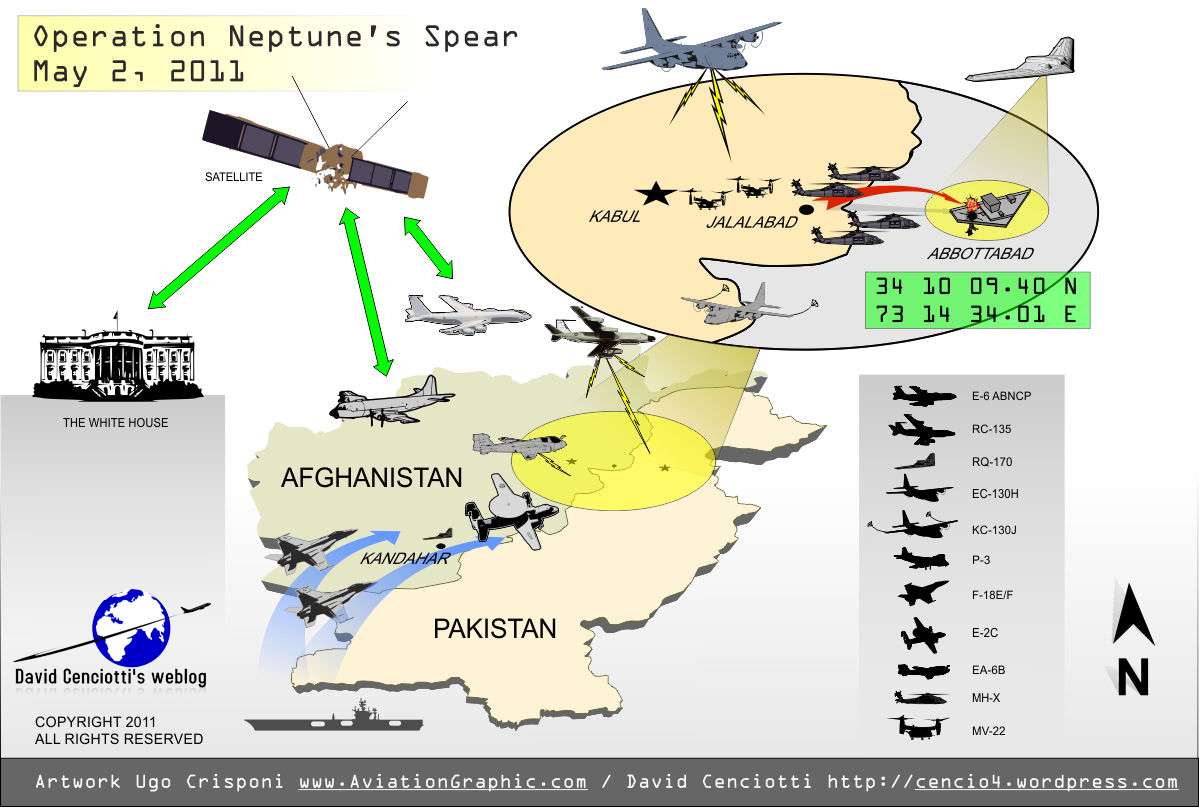 Video Shows One Reason Proponents Say A-10’s Heavy Gun Still Remains Relevant. Arguments about weapons systems tend to be circular and hard to win. The discussion about close air support, the retirement of the aging […]