Once closely guarded military secrets, remotely operated Unmanned Aircraft Systems (UAS) are now widely known to play a vital role in modern wars. But even while most people recognize that UAS are extremely important, they usually don’t know how they are controlled and by whom.

TechNewsDaily was recently invited to take a rare behind-the-scenes tour of a UAS ground control station in Italy that is jointly shared by the Italian and U.S. air forces to demystify some of the operations of these robot warrior aircraft.

A new breed of fighters

UAS are able to silently fly for 20 or more hours deep inside enemy territory; can carry a wide array of sensors, radars and even weapons to identify or attack time-sensitive targets; and, above all, they are “expendable” because they are controlled from a remote Ground Control Station by pilots who fly them in the same way you might fly a virtual plane in a flight simulator game.

Drones have been supporting ground troops, helping them to identify suspect activity and to prevent IED (Improvised Explosive Device) attacks in Iraq and Afghanistan for years. More recently, they were dispatched to attack Gaddafi forces in Libya, and also played a vital role in Operation Neptune’s Spear in Pakistan, where they helped monitor Osama bin Laden’s compound prior to the Navy Seals raid that resulted in the al-Qaida leader’s death.

A UAS consists of four main components: the remotely piloted vehicle (RPV), its sensors, its Mobile Ground Control Station (MGCS), and its data link and communication suite. That’s why the term UAS, which describes the whole system, is preferred to UAV (Unmanned Aerial Vehicle).

There are several types of remotely piloted vehicles in operation, but with a combat debut dating back to the ‘90s in the Balkans, and several years of operations in Afghanistan, Iraq, Pakistan, Yemen and Libya, the General Atomics Predator has become the primary and most famous U.S. unmanned platform.

Other nations have recognized the importance of the UAS as well. Among them, Italy used its first RQ-1A Predators in Iraq from 2004 to 2006 and later deployed them in Afghanistan, where they have logged more than 7,000 hours of flight since 2007. The Italian Air Force (ItAF) is also equipped with the first two of six ordered examples of the most advanced Predator B (known as the MQ-9 “Reaper” in the U.S.), which has an improved internal and external payload, is able to fly at higher altitudes and could soon be used to boost NATO ISR (Intelligence, Surveillance and Reconnaissance) capabilities in Libya.

In order to understand how Predators operate, we visited the MGCS located at the Amendola airbase in southeast Italy. The Amendola airbase is home to the 28 Gruppo (Squadron) of the 32 Stormo (Wing), which manages the entire Italian UAS force and remotely controls drones of the Task Group “Astore” performing ISR missions, convoy escorts, and special operations in Afghanistan. The technologies and procedures used by the ItAF and USAF are very similar, with the main difference being Italian Predators don’t currently carry missiles or bombs.

The aircraft operates with clear line-of-sight to the ground data terminal antenna, while over-the-horizon communication is achieved via satellite link. Both control modes can be used during the same mission. 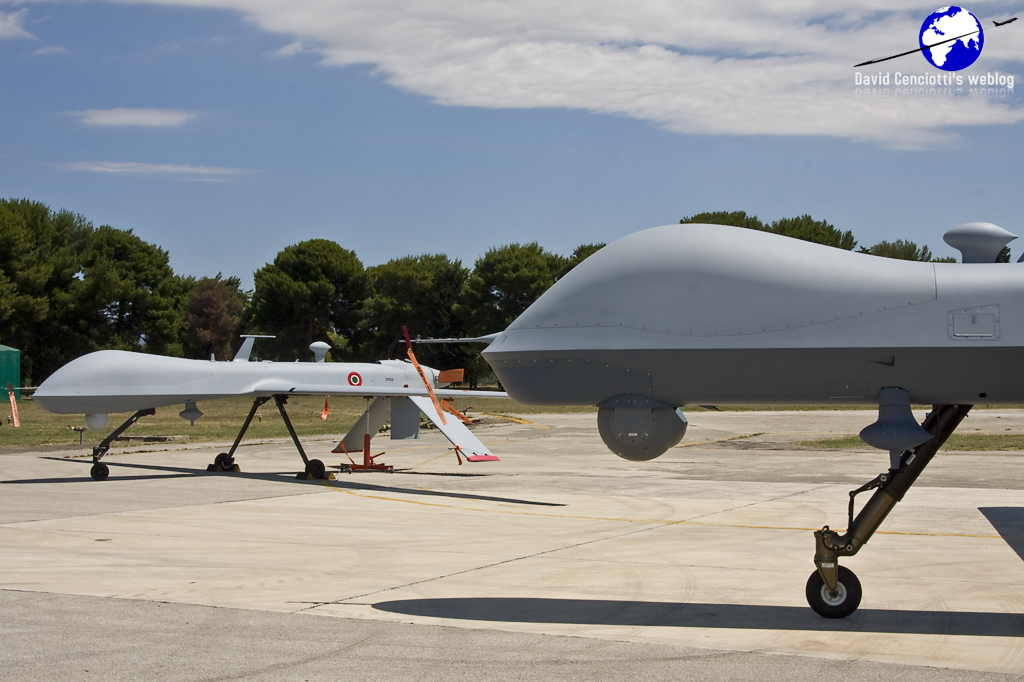