The Team, based at the King Faisal Air Base (Tabuk) in northwestern Saudi Arabia, fly the BAE Hawk Mk65 & 65A that have been specially modified with smoke generators by BAE and are painted in a very pretty green and white scheme. 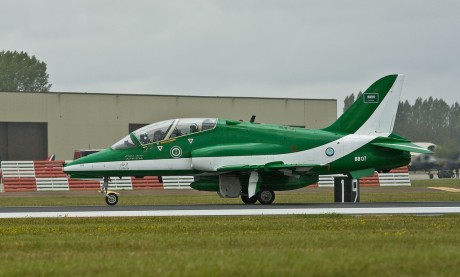 The team flew their first public display in Jan. 1999 at Riyadh during Saudi Arabia’s 100 anniversary celebrations, and went on to display all over the country and making their first oversea’s display in Bahrain the following year.

The team’s first trip to Europe came during 2011, with a display at the Air Power airshow Zeltweg.

Soon after the team made its first trip to the UK for the Royal International Air Tattoo (RIAT) at RAF Fairford, where the first day’s display was cancelled to very poor flying conditions, but impressed the crowd with a rolling display the following day. 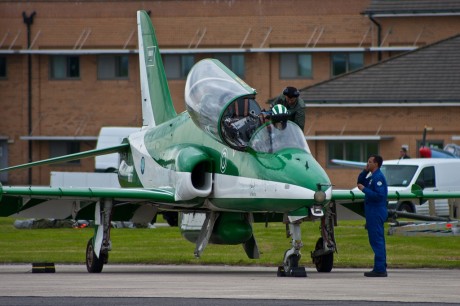 2012 saw the team return to the UK airshow circuit and they visited the Royal Naval Air Station Yeovilton for its Air Day where they flew a very impressive display and totally wow’d the crowd earning themselves a legion of new fans.

After one of his photo was posted on the Saudi Hawks Facebook page, the author got to know Major Issa with whom he became a friend. 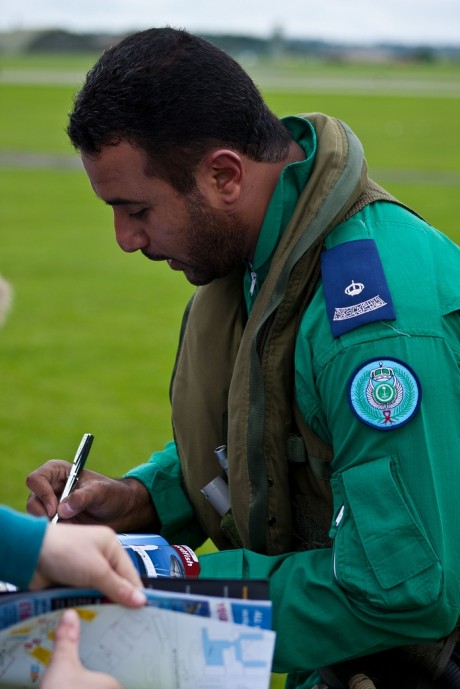 In the lead up to the 2013 season Major Issa was asked if he would mind an interview with The Aviationist to share some of this thoughts and how he had managed to become a member of the team.

Firstly Major Issa thank you for taking the time to talk to TheAvitionist.com. Many people will know that you fly for the Saudi Hawks, what made you want to become a pilot ?

To be a fighter pilot was a dream of my childhood. After I finished my hi school, I was determined to make that dream come true, so I found the way of it and thanks God I made it true.

So how did you become part of the team ?

After I joined the RSAF to become a fighter pilot, I saw the team in one of the King Faisal air academy graduations. At that time I was already in flying stage, and I wasn’t sure that I can be one of the team members. After I graduated from the academy by about 12 years my SQN commander called me in his office and he told me that the team is looking for a pilot. I took the chance among 8 candidates and after all the tests they chose me to join, and that’s how I became part of the team.

For someone who has never seen the Saudi Hawks display, can you describe it?

The Saudi Hawks display team is a 6 ship air show team. Our display is consists of two parts :

The pilot typically stays with the team about 3 to 4 year.

When you are at an airshow, you and your team mates are very popular with the crowd. How do you deal with this?

Generally speaking, people like air show flying even if they don’t know much about it. So we try to give them as much as we can; at the same time we consider to give a good impression about the pilots and about the country we come from.

If you had an opportunity to tell a tale of your time with the team what would that tale be?

I don’t really have a tale in my mind  at this time, but what I can say about my experience, specially after a 12 year in flying business before I joined the team, is that the air show is not an easy job. It is a very hard work thru 4-6 month to achieve one goal, that goal being a smile in a face of child with his parents and everyone’s happiness at the end of the day .

Other than the BAE Hawk what other military aircraft have you flown ?

I have flown the Tornado in both air-to-air variant, known as ADV [Air Defence Variant) in KSA, F3 in UK and air-to-ground known as IDS, GR4 in UK .

Is there Anything else you would like to say?

Thank you for giving me this opportunity, and wish you all the best .

A huge Thanks You to Major Issa for taking the time to answer our questions.

Not only are the Saudi Hawks very impressive pilots, they are all very very nice people and The Aviationist would like to wish the whole team a very happy and enjoyable display year during 2013. 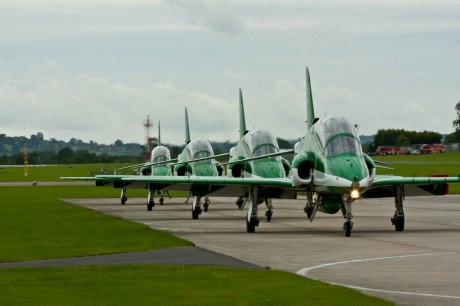 Video allegedly shows two UAE Air Force F-16s targeted by Houthi Surface to Air Missiles. A composite video that includes FLIR footage allegedly showing the attempted shoot down of what should be (based on claims) […]

Since Sept. 2, Royal Saudi Air Force Typhoons and Tornados are deployed to RAF Coningsby, in the UK, where they are training together with the Royal Air Force. The four Typhoons belong to the 3 […]