Although the event was not reported by Syria’s official news agency SANA, several Syrian and Israeli news outlets have been reporting that an Israeli drone was downed near the Syrian border with Lebanon.

According to eye-witnesses, Syrian air defenses reportedly shot down the aircraft over Deir al Ashayer, a village near Lebanese border: some people saw debris and buring wreckage fall from the sky whereas, according to The Times of Israel, residents posted on Facebook that the UAV (unmanned aerial vehicle) was downed by a surface to air missile fired from Syria, even if the drone crashed on the Lebanese side of the border.

Deir al Ashayer is located about 15 miles to the west of Syria’s capital Damascus, hence not far from the complex that was attacked by the Israeli Air Force last month. Furthermore, earlier on Feb. 20, Lebanese government news agency gave the news of intense Israeli combat planes activity over southern Lebanon: most probably, Syrian air defense batteries were on an heightened readiness status for any incoming threat from the border.

In June 2012, a Turkish Air Force RF-4E was downed by a Syrian air defense battery after violating the Syrian airspace. 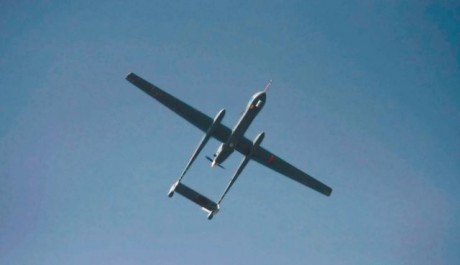