According to Israel Hayom daily, the Mig-21 fighter jet flown by a defecting Syrian pilot to Jordan last June was found to have been modified by the Syrian Arab Air Force to carry weapon of mass destruction and to fly without a pilot.

Indeed, U.S. experts who examined the plane believe that, with the help of Russia, Assad’s engineers have converted that airframe and possibly some more of the same type in the SyAAF inventory.

The Syrian Mig-21, piloted by Colonel Hassan Hamada landed at the King Hussein Air Base in Mafraq, Jordan, on Jun. 21.

Even if Hamada had removed his rank and requested political asylum upon landing in Jordan, the regime immediately denied that the Mig had defected and requested the airplane (and its pilot) to be returned.

Inspection conducted by U.S. intelligence teams on the plane revealed modifications that could explain why Syria put so much pressure on Jordan to have the jet back. 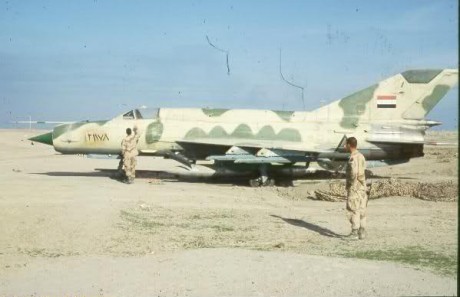 For sure modifying a combat plane to make it a sort-of drone is something that skilled engineers might be able to achieve quite easily. What could be more difficult is to properly control and fly it at high speed and low level to evade enemy radars and make it capable to hit its intended target on the long range, beyond LOS (Line Of Sight). But, launching the unmanned Mig on a pre-programmed one-way route would require less engineering work.

The news has yet to be confirmed by U.S. sources. Provided the Mig-21 was really modified, it’s still unclear whether the Syrian regime converted the plane to use it against the rebels, a neighbouring country, a U.S. aircraft carrier or warship in the Mediterranean Sea.

Hezbollah has recently proved its ability to fly a remotely controlled drone deep inside the Israeli airspace. The Syrian regime has made extensive use of drones to spy on rebel activities since the beginning of the uprising.

With the help of Russian or Iranian engineers, they may have modified one or more Mig-21s to use them in kamikaze missions either against the Free Syrian Army or Turkey, Israel or Jordan in an attempt to spark off a regional war.

How to survive in a dogfight, alone against six MiGs: the lesson learned from Richard Schaffert dogfight.

An incredible air-to-air engagement, where one U.S. pilot alone survived to six North Vietnamese MiGs. A true milestone in the progress of naval aviation, the Vought F-8 has been one of the few carrier-based fighters […]