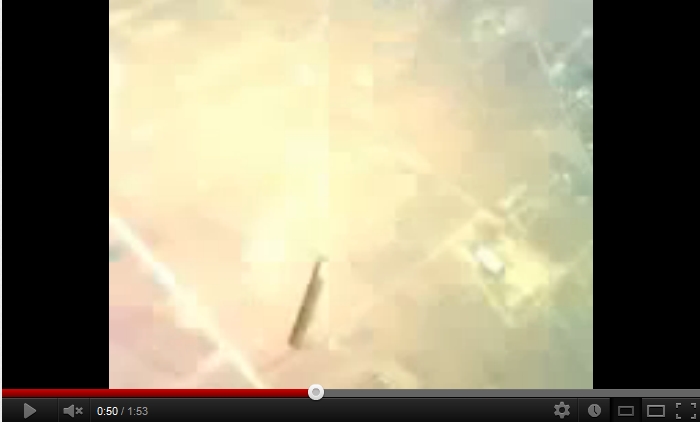 Barrel bombs are oil barrels, turned into explosive devices that are dropped over rebel forces across Syria by Assad’s choppers. They are believed to contain about 200 kg of TNT explosive and capable to destroy any building and surrounding area.

More details about such weapons can be found on many informative posts on Brown Moses and Bjørn Holst Jespersen’s blogs.

Noteworthy, for the first time such DIY barrel bombs can be seen being thrown almost at random, from medium/high-altitude, by the open rear door of a Syrian Arab Air Force helicopter.

The amount of explosive being carried by each helicopter involved in attack missions could explain the huge mid-air explosion of a Hip hit (most probably by a MANPADS) in the skies over Idlib on Oct. 17.

A Mil Mi-8 Hip gunship helicopter, being extensively used by the loyalist forces in Syria, has been shot down by the Free Syrian Army (reportedly using a ZU-2-23) on Aug. 27. After the Mig-23BN shot down […]

The following video, just uploaded to Youtube, allegedly shows an Assad regime’s drone workshop in Aleppo, just captured by the rebels. Interestingly, the type of drones depicted in the footage are not the “Pahpad“, the […]

Video: Syrian Mig-23 destroyed on the ground by the rebels

This video, allegedly filmed on Mar. 7, 2012, shows rebels hitting a Syrian Arab Air Force Mig-23MS on the ground at  Abu-Dhahur air base in the north west region of Idlib, with an AT-13 Saxhorn-2 […]