Located between Aleppo and Idlib, Taftanaz is a major airbase in the northwest of Syria used to launch fighter jets and helicopter gunships against the rebel positions.

A fierce fighting is currently taking place at Taftanaz to liberate the key airfield, an assault that loyalists are trying to counter with Su-24 Fencer attack planes.

The Russian Sukhoi of the Syrian Arab Air Force can be seen jinking a bit during a medium/high level attack with four free fall dumb bombs released at the same time.

Believed to be based at Tiyas with the 819 Squadron, the 20 Su-24 Fencer bombers reportedly in service with the SyAAF are among the most deadly aircraft in the hands of Assad.

They were rarely seen so far, most probably to prevent them from being downed by the rebels (or because they mainly operated at high altitude). 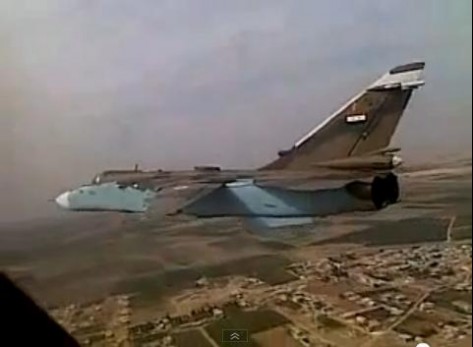 Russia is evacuating nationals from Syria in anticipation of a U.S. strike on Damascus’s Chemical Weapons arsenal. An Il-62 registered RA-86570 and belonging to the Russian Ministry for Emergency Situations made a very quick visit […]