One of the most interesting things of the Syrian uprising, from the military analyst perspective, is the use of drones by the Syrian regime.

Syria had its drone fleet when the uprising started. According to some sources they are manufactured domestically, at the Syria’s Scientific Research Center, even if, according to the images surfaced so far, all of them are a copy of those produced by Iran.

Among the types believed to be operated by Bashar al-Assad forces: the Mohajer 4, the Ababil, (most probably) the Mirsad-1 that Hezbollah terror group has used to violate the Israeli airspace in the past, and, the only one filmed over Homs that could be clearly identified as the “Pahpad”  (that is not the actual name of the robot but the short form in Persian for “remotely piloted aircraft”).

There’s another interesting drone that was spotted recently and still has to be identified. It is particularly interesting because it does not look like any of the above mentioned drones (even if a correct identification is impossible because of the extremely low quality of the footage). At first glance, its shape, color etc, recalls those of Israeli or U.S. drones. However, it is quite unlikely that it was not Syrian considered the amount of air defense and anti-aircraft systems believed to be active in Syria: U.S Joint Chief Dempsey recently said that Syrian air defense is 5 times more sophisticated than Libya, 10 times more than in former Jugoslavia (1999) and covers one fifth of the terrain.

Actually there’s also a video of seemingly solid flying object orbiting into a smoke cloud of a burning oil pipe, that someone still considers a drone.

What are these drones doing over Homs?

Depending on the payload they are carrying they can could be eavesdropping into “enemy” communications or helping ground forces to pinpoint rebels by locating the oppositors’ firing positions and directing the shelling accordingly. Noteworthy, such furing support flights do not take place at night suggesting that the loyalist robots can only carry a color/monochrome daylight TV camera.

Rebels have affirmed that they were able to shot down and recover some of these Syria’s made-in-Iran drones. However, even if the shape of the recovered drone recall that of the “Pahpad” or “Mohajer 4”, based on the below video, the downed robot seem to be much smaller that the typical UAVs (whose wingspan exceeds 5 mt).

Here below you can find a screen dump, published by Ynet of another drone recovered by rebels. 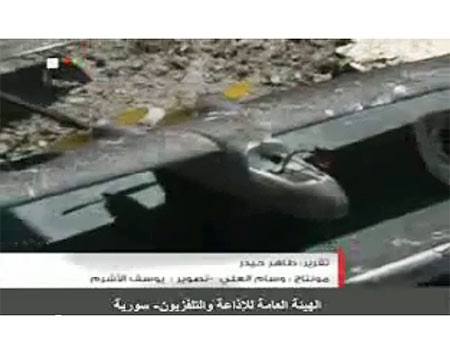 The new Kaman 22 drone is clearly inspired by the American MQ-9 Reaper UAV (Unmanned Aerial Vehicle), although probably smaller in size. As announced at the beginning of the month, Tehran has eventually unveiled the […]

Job done! Russia’s most advanced spyplane is returning home after deployment in Syria

The Tu-214R is currently returning to Russia after a 14-day deployment to Syria. The Russian Air Force Tu-214R ISR (Intelligence Surveillance Reconnaissance) aircraft that was deployed to Syria on Feb. 15 is seemingly returning home. […]