The drone silently spying on the clashes on a suburb of Damascus, Syria, on Feb. 14, could be a much rarer UAV (Unmanned Aerial Vehicle) than the Mohajer 4 model initially believed to be depicted in the amateur video uploaded on Youtube.

Another image published by the Open Source GEOINT (OSGEOINT) blog shows the same robot from a different angle providing details that could not be visible from below.

The most evident one is that the drone has a tail boom that appears to be connected to the vertical stabilizers in the middle of the fins rather than at the top, as in the Mohajer 4.

This particular shape fits the one of a new “made in Iran” drone that, according to the members of the interesting Iran military forum, that is thought to be called “Pahpad” (پهپاد), the short form of “parandeye hedayat pazire az rahe door” (“پرنده هدایت پذیر از راه دور”) that is the Persian for “remotely piloted aircraft”.

Few images of this drone can be found on the Internet. The only one available are those published by Mashregnews.ir website (posted below) and a couple more showing a camouflaged “Pahpad” flying over Sudan.

Noteworthy, the shape and livery of this plane is much similar to the one shown in a picture used in an article published  FARS news agency in 2007; an article about a drone capable to perform both reconnaissance and attack missions on enemy targets, designed and manufactured by two Iranian students.

If you compare the image below and the ones above you’ll notice that the two drones are extremely similar (the main difference seems to be the landing gear).

Is this the same drone? Did FARS use an image of the so-called “Pahpad” for the article or is the drone currently flying over Syria a development of that once amateur robot designed by two students? 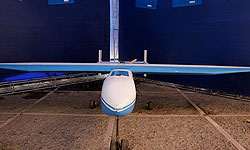 Anyway, although the type of drone was eventually identified, whether the “Pahpad” drone belongs to the Syrian regime or it is a Hezbollah-operated UAV remains a mystery. However, since it was filmed overflying Kafr Batna, a suburb of Damascus, the first hypothesis (Syrian UAV) seems to be more likely.

Bjoern Holst Jespersen has contributed to this article.