According to an article published by the Washington Times, the F-35A, the Conventional Take Off and Landing version of the Joint Strike Fighter, would be defeated in aerial combat because of his current shortcomings.

Mentioning a leaked Pentagon report made available by POGO, the article explains that “out-of-cockpit visibility in the F-35A is less than other Air Force fighter aircraft” thus limiting a pilot’s ability to see aerial threats surrounding him.

The problem is in the large head rest that impede rear visibility and the ability of the pilot to check the aircraft’s 6 o’clock for incoming aerial or surface threats.

Another shortcoming is the aircraft adveniristic helmet mounted display system (HMDS Gen. II), that has not yet solved focal problems, blurry and double vision in the display and misalignment of the virtual horizon display with the actual horizon.

The HMDS Gen. II integrates FLIR (Forward Looking Infra Red) and DAS (Distributed Aperture System) imaging, and night vision (without somehow uncomfortable NVGs – Night Vision Goggles) into a single helmet in which essential flight and weapon aiming information are project onto a virtual HUD (Head Up Display) on the visor. 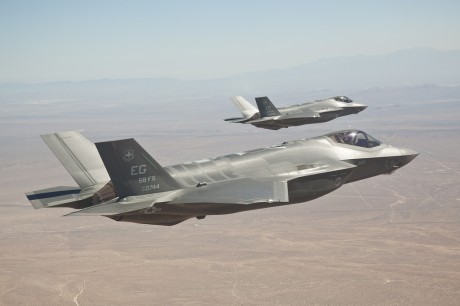 Few weeks ago in a Flight Global piece by Dave Majumdar, Bill Flynn, Lockheed test pilot responsible for flight envelope expansion activities for the F-35 had claimed that all three variants of the Joint Strike Fighter will have better kinematic performance than any fourth-generation fighter plane with combat payload, including the Eurofighter Typhoon and the Boeing F/A-18E/F Super Hornet.

Such claims were strongly disputed by a Eurofighter Typhoon industry test pilot, who tried to debunk all Flynn’s “theories” about the alleged superior F-35 performance.

Considered the above mentioned F-35’s flaws (and all the shortcomings highlighted by the report…), the kinematic performance of the (recently, once again, grounded) stealth fighter, is the least problem.