This image, sent to me by Ulaşcan Yüksel, shows an impressive lineup of Turkish Air Force F-16C fighter planes on an airbase in Turkey.

I think 31 “Vipers” (F-16’s nickname within the fighter pilots community) are parked along the taxiway, but not completely sure. 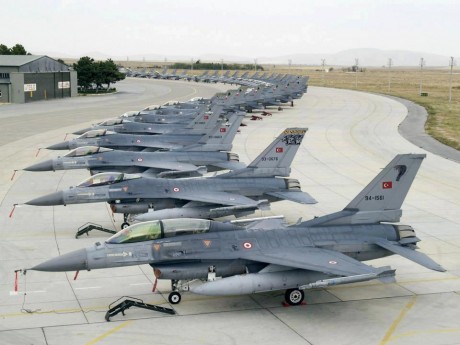 Turkish F-16s have been quite active during the Syrian crisis, being scrambled to intercept both a Syrian liner allegedly carrying weapons and Assad’s helicopters flying a bit too close to the border between Syria and Turkey.

The Top Aces jets will operate out of Mesa airport providing the USAF with the first contracted 4th gen. aggressors. The Canadian company Top Aces received the first four F-16 Fighting Falcons, out of a […]

Here’s the Russian version of the Su-24 shootdown. On Nov. 24, a Su-24M Fencer bomber was shot down by a TuAF F-16 near the Turkey-Syria border. The Turkish Air Force claims the Russian bomber violated […]

On Jan. 5, 2013, a Syrian Arab Air Force Mig-23 whose pilot had been ordered to attack Aleppo, fled to Turkey. Upon entering Turkey’s airspace, the defecting pilot replied to the radio calls of the […]