The Alitalia B777 was about three miles from the touchdown point at an altitude of approximately 1,500 feet and the drone, described as a four-propeller, black-colored remotely controlled aircraft about 4-feet in diameter, came within 200 feet of it.

Here below you can find the video that embeds the audio of the near miss. Noteworthy, AZ608 used the radio callsign Alitalia 60U “Heavy”.

Whereas the FBI is investigating the incident and looking to identify and locate the aircraft and its operator (flying such dangerous toy next to a major airport is at least insane), it may be interested to analyze what happens when a drone hits a commercial plane configured for landing. 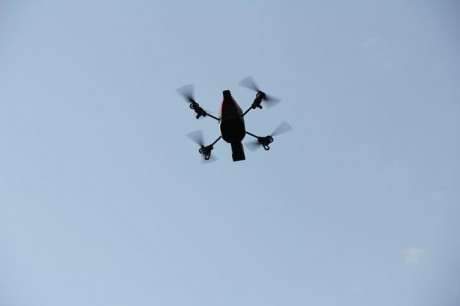 Anything hitting a plane configured for landing, hence slow and close to the ground, can theoretically cause a disaster.
Even if the drone was relatively small (at least if compared to pro-ones, i.e. Predator, Reaper and other famous UAVs) the extent of the damage could be quite large.

Let’s see some of them:

Summing up: a lot of bad things can happen, but it all depends on the drone’s size and point of impact. Hence, better you fly your RC-model far away from airports if you don’t want to cause or be part of an aviation incident….or disaster.

On Feb. 3, 2012, NATO has finally agreed to implement the AGS (Alliance Ground Surveillance) a project that is based on high-altitude long range UAS (Unmanned Aerial Systems), a main operating base and several command […]

After displaying a stealth fighter that was a sort of joke, obsolete missiles as they were new, fake or unrealistic UAVs (unmanned aerial vehicles), Tehran may  have finally unveiled something real. In a ceremony held […]