White smoke escaping through a small chimney visible from St. Peter’s Square is traditionally used to announce the world the election of a new pope following a successful vote by the conclave.

Let’s see it from this point of view and let’s believe it is a good premonition but, as some readers have noticed, the white helicopter used by Benedict XVI’s on his final flight from Vatican City to the papal summer residence sent some white smoke from the right hand engine just after landing at Castel Gandolfo, at 17.24 LT on Feb. 28, 2013.

Videos circulating online show the white Italian Air Force VH139 (a VIP version of the AgustaWestland AW139 used during the London 2012 Olympic Games opener) landing on the helipad of the papal summer villa located 15 miles to the southeast of Rome, after the 19-minute ride.

As the chopper blades come to a stop, white smoke shortly comes out from the engine 1 area. 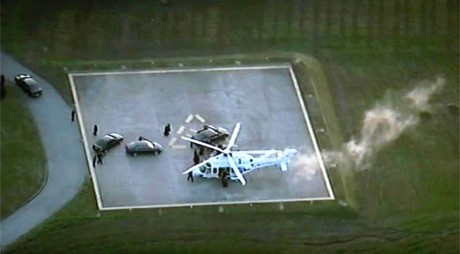 What may have caused the smoke?

Even if white smoke is usually caused by oil leaks in engine, sources familiar with AW.139 procedures say smoke can be caused by some fuel burning after a quick engine shut-down executed without a prior cool-down procedure.

“A normal procedure that can be used in certain conditions to accelerate the engine shut-down,” that could have been used on Feb. 28 to stop the rotor as some cars had entered the Castel Gandolfo helipad coming a bit too close to the papal chopper.

Nothing special then, unless we think to the lightning that struck the top of the Vatican’s St Peter’s Basilica, just hours after Pope Benedict XVI resigned…. :-)

Let’s Have a Look At The Helicopter The U.S. Air Force Has Selected To Replace The UH-1N Huey

The MH-139, a variant of the AW139, has been selected by the U.S. Air Force to take over the role of protecting the ICBM (Intercontinental Ballistic Missile) bases and transportation of U.S. government and security […]