As tensions continue to rise on the Korean Peninsula, the U.S. Navy and Air Force are ready to watch upcoming missile launches. The two services use a variety of ground based, sea-going, and aerial assets to gather intelligence on foreign missile tests.

For decades, the U.S. Air Force has relied on its small group of RC-135S missile tracking aircraft, code-named COBRA BALL. These aircraft are based at Offutt Air Force Base, outside Omaha, Neb. and are flown by the 45th Reconnaissance Squadron.

COBRA BALL is used to track ballistic missiles reentry vehicles and warheads during the final phase of flight.

Take special note of the black low-glare paint used on the starboard wing, to improve image quality and prevent glare during photography. 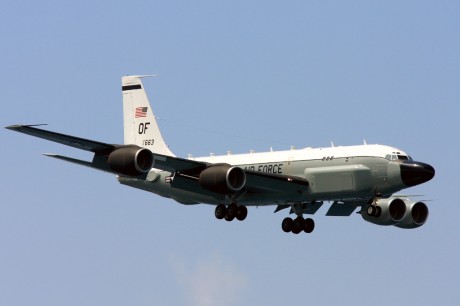 The COBRA DANE radar at Eareckson Air Station in Shemya Alaska is used to provide radar coverage over the Northern Pacific. While the system is accurate enough to track small objects in space, its utility depends on the direction, or azimuth, of the missile launch. The last test of a North Korean missile featured a southern trajectory, launching south over the East China Sea.

In the past few days, Korean media outlets reported the movement of Musudan IRBM launchers and vehicles to Eastern portions of North Korea.

These missiles, if launched on a test flight, would likely be launched in an easterly direction, overflying Japan and landing in the Philippine Sea.

Observation Island is schedule to be replaced in the near future by USNS Howard O. Lorenzen (T-AGM-25). However, Lorenzen experienced significant difficulties during acceptance trials, and has not yet become operational. The new ship will be equipped with an upgraded variant of the legacy radar, code-named COBRA KING.

Air Force fuel trucks repainted to keep temperature within the F-35’s threshold. According to an Air Force press release, the F-35 jets may face another issue. The problem is not related to the jet itself, […]