It looks like the B-1Bs strategic bombers heard last week by milair monitoring expert Steve Douglass did not deploy to Andersen Air Force Base, Guam.

A couple of nights ago, from his monitoring station in Amarillo, Douglass heard a flight of seven Dyess Air Force Base’s 7th Bomb Wing “Bones” asking for weather report for Guam, where they were seemingly going alongside some supporting KC-135s aerial refuelers.

However, the B-1s never landed in the strategic airbase in the Pacific.

Talking to Foreign Policy Killer Apps, U.S. Pacific Air Forces spokeswoman said that the planes are not at Andersen Air Force Base. “The definitely didn’t even stop through,” she added.

Sources at Dyess AFB have confirmed to Douglass that seven planes were launched at night a couple of days ago. Two of them were spares: they returned to the airbase near Abilene, Texas, while the remaining five continued to their final destination.

Unfortunately, the source could not say where the Lancers eventually landed. 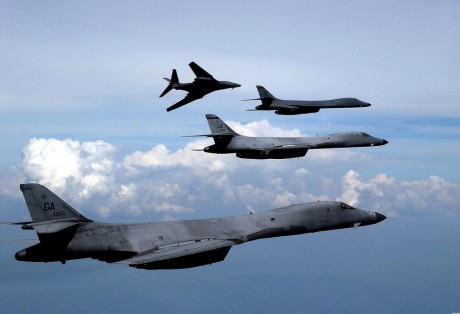 So, the question is: where did five B-1s deploy to last night?

Even if they did not go to Guam, their flight remain a mystery for at least two reasons:

1) Big bombers (B-1s, B-52s, B-2s) usually deploy in pairs. When more planes have to reach a forward operating base, they usually move individually. Five planes moving together (if not in formation, at the same time) is far from being normal.

2) The route is somehow weird: when they deploy to Europe, Middle East (Thumrait or Al Udeid) or Diego Garcia in the Indian Ocean, B-1s fly eastward, overflying the Atlantic Ocean and then the Mediterranean Sea. The route across the Pacific is unusual.

4) They talked on the radio about Guam (the most important base in the region, to be protected by THAAD anti-ballistic missile defense systems): if they were deploying there to reinforce U.S. presence near North Korea, preparing a preemptive attack that would face little resistance by the obsolete North Korean Air Force, they would keep the information secret by using secure radios.

Maybe. It must not be forgotten that U.S. and NATO planes used to talk in the clear during Libya Air War missions.On the other side, they knew some airband listeners were hearing them and wanted them to spread the news that seven (actually five) bombers were going to Guam.

What’s your opinion. Where were they going (Japan, Thailand, Philippines, ?) and why?

These cool photos prove that, given to its privileged observation position, the “boomer” job is one of the most interesting in the Air Force. Taken on Oct. 13, from a KC-135 Stratotanker belonging to 340th Expeditionary Aerial […]

On board a C-130J during a 16-Ship Formation Flight: the largest formation of Super Hercules aircraft to date

The following interesting video (with radio chats) brings you on board a C-130J of the 40 Airlift Squadron, at Dyess Air Force Base, Texas, during the “largest” Super Hercules formation ever (I haven’t had the […]

Check Out This Photo Of A U.S. AC-130J Ghostrider Gunship Refueling At Night In The Persian Gulf Area