The following interesting map shows all the airbases in North Korea with a quite detailed list of the Regiments and Squadrons of the Korean People’s Army Air Force (North Korean Air Force).

The majority of the airbases seems to surround Pyongyang, most probably with the purpose to defend the capital town: a “defensive ring” that includes Sunchon (were Mig-29 Fulcrum jets are based), Wonsan and Onchan. 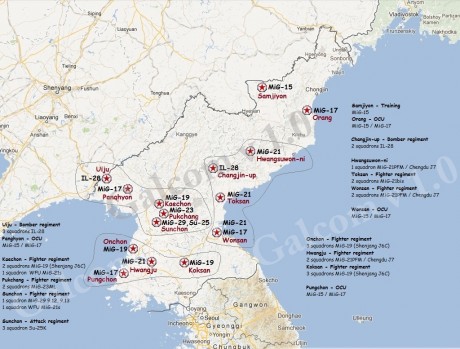 Some airbases are located next to the border with China (Samjiyon to the northeast and Uiju to the east); Koksan, Hwangju and Onchon, near South Korea, north of the DMZ, host three fighter regiments are, whereas Pungchon, on the Korea Bay, is the home of the Mig-17 OCU (Operational Conversion Unit).

You don’t need to be an expert, but a quick look at the type of aircraft flown by each unit of the Korean People’s Army Air Force shows that Kim Jong Un’s Air Force operates obsolete, Cold War-aged combat planes that would have very few chances to threaten U.S. stealth bombers escorted by F-22 Raptors (or simply South Korean ones) that could be called into action following the rain of cruise missiles that would open an eventual war.

Russian Mig-29 Fulcrum crashes in Siberia, Moscow grounds them all.

On Sept. 6, Russia’s Defense Ministry announced  that a Russian Air Force MiG-29 Fulcrum fighter crashed 27 kilometers from Chita, in Siberia. The body of the pilots was found by a rescue team whereas a […]