As already explained, Kim Jong Un has approved an attack plan on targets located in the Pacific and mainland U.S. following the yesterday long range round robin mission over South Korea.

Among the various reasons to doubt about North Korea’s capability to hit Continental U.S. with ballistic missiles, there is also the map deliberately exposed by the images of Kim Jon Un meeting with his military aides on Mar. 29.

Indeed, Pyongyang’s missiles would find it extremely difficult to reach their intended targets following the path drawn on that map, instead of a great circle route.

A great circle is the shortest path interconnecting two points on a sphere.

The following maps would have been a bit more credible. 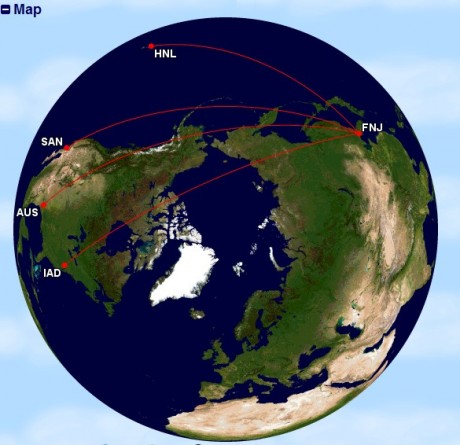 Several news agencies are quoting the Japanese Kyodo by saying that one of the Musudan missile launch vehicles has moved its missile into the firing position. The North Korean authorities had moved several (launchers) to […]