According to the Wall Street Journal, the aircraft flew from Kadena air base, in Okinawa, Japan, to Osan in South Korea to take part to the Exercise Eagle Foal.

The arrival of the U.S. most advanced fighter planes follows the “show of force” by the B-52s bombers and the B-2 stealth batwing bombers, that conducted training missions in South Korea’s gunnery ranges in the past weeks.

Even if it is almost only symbolic, the presence of the Raptors in the Korean peninsula is just the latest U.S. deterrent to the Pyongyang’s alleged attack plan (threatening some U.S. towns) and the demonstration  by the Pentagon of the capabilities Washington is capable to put in place should the need to intervene arise. 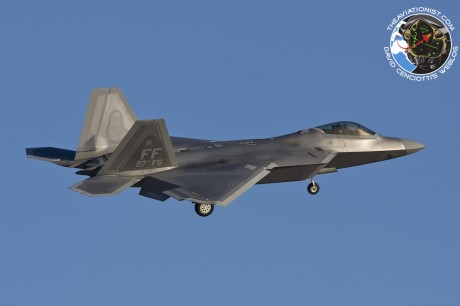 What’s the role the F-22 could play in case of attack on North Korean targets?

Although the Raptors would probably escort the big bombers during the opening stages of an eventual campaign (after the rain of cruise missiles that would wipe out most of North Korea’s air defenses…), their role could not be limited to providing air superiority (to be easily and quickly achieved considered the status of the geriatric North Korean Air Force and its obsolete Migs): as demonstrated in last year’s Exercise Chimichanga,the F-22 has the ability to play a dual role in the same mission: HVAAE (High Value Air Asset Escort) and air-to-surface.

Indeed, the F-22 can be tasked to escort bombers into a an anti-access target area (a superfluos task when air superiority has been already achieved) and then perform an immediate restrike on the same target attacked by the B-2, B-52 or B-1 bombers being accompanied, or attack another nearby ground target, if needed.

With the latest release of software and hardware upgrades being fielded within a 6.9 billion USD program, the fleet of radar evading 5th generation planes is being turned into multirole: Raptors are getting synthetic aperture radar (SAR) with ground mapping capability as well as the ability to carry eight 113kg (250lb) Small diameter bombs (SDBs), multipurpose, insensitive, penetrating blast-fragmentation warhead for stationary targets that can be equipped with deployable wings for extended standoff range.

The prototype of what is believed to be the China’s second stealth fighter jet performed its maiden flight on Oct 31, when it took off at 10:32 AM Local Time from the runway of the […]

The following video is extremely funny. Basically, it is an animated cartoon that features several very well known aircraft (including the B-2, the KC-10, the A-10 and many more ones) in a what can be […]