Poland is to be involved in the NATO Alliance Ground Surveilance programme, aim of which is to watch over the ground objects and movement of the ground forces beyond the Polish border (supposedly eastern) using drones. 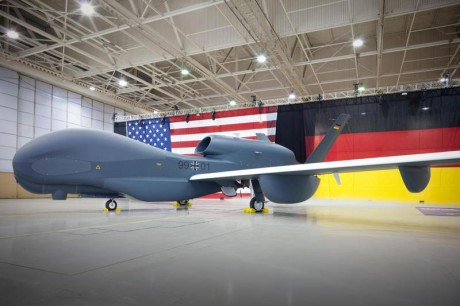 NAGSMO board of directors has received Polish MOD application and applicable documents will be prepared.

Jacek Sońta, Polish Ministry of Defence Spokesman says that “after receiving these documents they [the documents – JS] will be undergoing negotiations and interdepartamental discussion for 6 months.”

Poland is to enter the programme in the early 2014.

The AGS is going to involve five  RQ-4 Global Hawks, Euro Hawks to be accurate, HALE (High Altitude – Long Endurance) drones stationing in Germany, and the data collected will be passed on to intelligence and recon units taking part in the programme.

According to what Polish MOD says Polish companies producing radar and avionics, such as Bumar Elektronika, Netline, WIŁ and Transbit could be involved as well. That would be a significant boost for them, introducing these companies into the international economic arena.

Defence24.pl states the main base is going to be established in Sigonella, Sicily, and the whole system is going to achieve working readiness between 2015 and 2017.

The drone programme might be a part of the response to the Russian activity on the Polish border.

The Belarus and Russia are planning to conduct exercise named West 2013 autumn this year. Similar exercise took part in 2009. Its scenario assumed that Polish uprising happened in Grodno, Belarus, and Russia was called for help. Specnaz  neutralized the revolt, and the allies (Russia and Belarus) use tactical weapons to defend themselves from the Western attack starting from Poland.

As Polish Uważam Rze newspaper recalled in January this year, there was no significant reaction on the side of the Polish MOD. Bogdan Klich, Head of MOD at that time had been surprised with the scale of exercise but also doubt led the potential probability of such scenario taking into account the fact that none of the NATO countries has aggresive stance towards the Eastern partners.

According to statrisks.com the Zapad 2013 (West 2013) exercise is going to involve a scenario in which a nuclear attack on Warsaw is going to be a part of:

“We are not going to threaten anyone. We do not regard any state as our enemy. We are open and consistent focusing on collective defence. I mean the defensive  capabilities of, if I may say so, the joint army of Belarus and Russia and the regional force grouping in the western zone,”

Alyaksandr Lukashenka said about the manoeuvres.

The Russian Ministry of Defence gave to understand it doesn’t like Poland’s activity in NATO.

“We need to take into consideration the NATO potential. We see that Poland became a place for many of its infrastructure projects. We are concerned about it for many reasons, in particular because NATO tries to convince us that the threat comes from the South, Africa and the Near East. But we see military preparation in NATO’s eastern part, on the territory of new alliance members. We need to take it into account in our military doctrine,”

Furthermore Uważam Rze claimed that NATO would not have enough confidence to conduct similar exercise involving e.g. Russian minority uprising in Laivia. This point is no longer valid – the Alliance is not passive this time as it is preparing to conduct Steadfast Jazz 2013, which will be the largest scale manoeuvres this year.

Although the scenario for this exercise is not known yet, it can be seen that the dialogue and sort of Cold War setting still exist between the West and East, despite the rhetoric of partnership. The general objective is to train and apply collective defense which is one of the foundations underlying NATO policy.

SFJZ 2013 is also going to be devoted to checking how Lile HQ (French), responsible for NATO Response Forces, will cope with its new function, specified in the Article 5 of the Washington Treaty.

Secondly the exercise aims at integrating land, air and sea forces activity, what will involve interconnecting 7 IT Networks.

Czech and French ABC Warfare units, one of British battalion are said to be involved. Over 1,200 French soldiers are declared to take part in the exercise.

Polityka Wschodnia predicts several reactions on the side of the Kremlin, ranging from energy sanctions (as Poland is a client of Russian Gazprom), to a cyberattack.

Since it is the first info about the drones, it is hard to assess how the society will react and how the media discourse and discursive representation of the drone issue will develop, as the drone-related discourse is hot within the US media.

The anti-missile shield idea was welcomed neutrally, the mainstream media did not report any protests, and the shield was presented as a natural step of NATO integration process.

Russian MiG-31s and Su-35S escorted a B-1B “BONE” from Dyess Air Force Base, flying in international airspace over the Northern Pacific Ocean, as it “approached” Russia’s airspace. On Sept. 15, 2020, the Russian MoD released […]