On Feb. 3, 2012, NATO has finally agreed to implement the AGS (Alliance Ground Surveillance) a project that is based on high-altitude long range UAS (Unmanned Aerial Systems), a main operating base and several command and control stations.

Wondering which drone will provide the alliance the capability to monitor “what’s happening on the ground, at long range, over periods of time, around the clock, in any weather” by year 2015?

Obviously, the Northrop Grumman RQ-4B Global Hawk, the same type of unarmed reconnaissance drone that the U.S. Air Force has recently decided to scrap in favor of the old U-2 spy planes, Cold War veteran that will be kept in service well into the 2020s.

According to NATO Secretary-General Anders Fogh Rasmussen, the alliance will acquire five RQ-4Bs that will be based at the MOB of Sigonella, in Italy.

Located in southeast Sicily, “Saigon” (as the U.S. aircrews dubbed it) has already been used during the Air War in Libya to host the Air Force’s Global Hawk and Reapers involved in ISR (Intelligence Surveillance and Reconnaissance) and SCAR (Strike Coordination and Reconnaissance) missions in North Africa.

For instance, the U.S. RQ-4Bs belonging to the 9th Operations Group/Detachment 4th of the U.S. Air Force deployed to Sigonella, were the first to fly over Libya to perform high altitude Battle Damage Assessment sorties on targets located in regions with  a residual SAM (Surface-to-Air Missiles) and MANPADS threat. Since Apr. 21, 2011, they were joined by armed MQ-1 Predators that flew their first strike sorties in the areas of Misurata and Tripoli and launched 145 air strikes firing hundred AGM-114 Hellfire missiles before taking part in the operation that led to the capture and killing of Gaddafi in Sirte, when an MQ-1 teamed up with a mixed flight of a Mirage F1CR and a Mirage 2000D and attacked the convoy used by the Libyan dictator in his attempt to flee the city.

Strategically located in the middle of the Mediterranean Sea, Sigonella is the ideal base to conduct surveillance of North Africa, East Europe and Middle East. The base will not only host the (remaining) Air Force Global Hawks and AGS RQ-4s: the U.S. Navy MQ-4C BAMS-D (Broad Area Maritime Surveillance) drone, the “maritime” version of the Global Hawk,  is expected to be based in five locations around the world, including “Saigon”, where some other platforms, as the French Herons and the (manned) RAF Sentinels could be deployed as well. 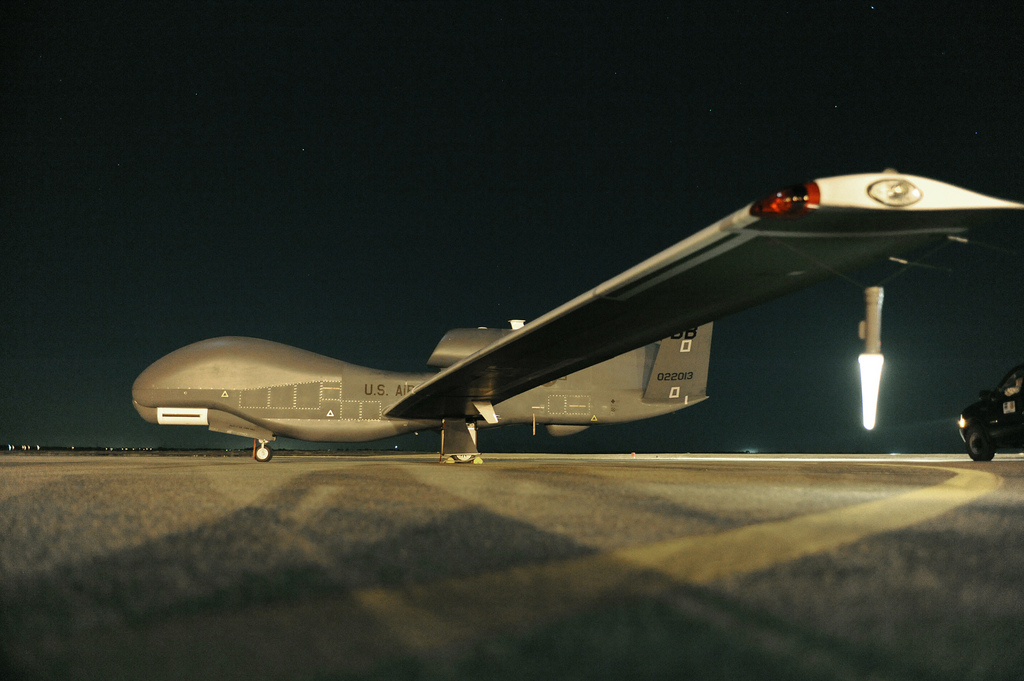 Hand Signals: the next step to controlling UAVs on aircraft carriers

The environment you find on the flight deck of an aircraft carrier is constantly monitored. The organized chaos of launches, recoveries and taxi takes place in a totally unforgiving environment for an unmanned aircraft (and […]

One of our readers has spotted something interesting in a satellite image Although Lockheed Martin RQ-170 Sentinel UAS (Unmanned Aerial Systems) have operated from Creech Air Force Base, Nevada, for a long time, and some […]