Poland has the most modern set of F-16s in Europe.

48 F-16 C/D Block 52+s  were purchased in order to replace the obsolete ex-Warsaw Pact MiG-21s, Mig-23s and other fighters (the only remaining jets in the Polish Air Force are Mig-29s, TS-11s of the aerobatic team, Su-22s – soon to be replaced – possibly with UCAVs).

Regardless of that fact they still had to be serviced in the US as Poland did not have qualified personnel to do that. This is going to change very soon. 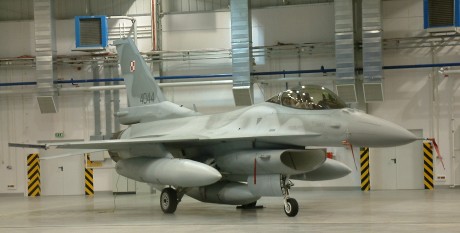 It is the 6th facility of that kind in Europe, making Poland somewhat unique in this respect. The other countries in Europe that are able to service Vipers on their own are Greece, Belgium, Turkey, Denmark and Portugal.

Two year contract that was signed by the facility may not seem impressive, as the money involved is only 4 Million Euro, but it took 10 years to prepare the center for full scope of F-16 maintenance.

Long training programme provided by Lockheed Martin had to be executed. Nevertheless it was logistically comfortable  for the Polish workers, as it took place not in the US but in Bydgoszcz, on site. This choice reduced the costs and increased the speed of training.

The scope of activity for the servicing center is to provide experience to the ground crews in the F-16 bases (Krzesiny, Łask) and to carry out any repairs that are impossible to complete on the mother-airfield.

According to Indian media an air exercise held ten years ago “highlighted the innovativeness of Indian fighter pilots, the impact of Russian jets and the potentially fatal limitations in USAF pilot training.” Held at the […]