Regarding the last post about the Korean MiG-21s’ highway operations here’s another interesting thing.

It is a fragment of a Polish movie Na Niebie i Na Ziemii (In the Sky & On the Ground) which is an excellent example of Cold War propaganda. The given fragment of the 90-minute movie shot in 1973 shows a group of MiGs landing on the highway strip somewhere in Poland.

The production was to be an eastern equivalent of the Top Gun mixed with The Right Stuff.  It tells a fictional story about a young military pilot who wanted to become a test pilot but health problems prevent him from flying.

In opposition to Top Gun, where MiGs were played by F-5 Tigers painted in black color scheme with red stars, the Polish movie introduces us to the whole range of the authentic People’s Republic of Poland‘s Air Force airplanes.

Some scenes in the movie are very similar to those from the French contemporary production Skyfighters featuring Mirage 2000s, as the one showing the MiGs flying over the sea.

The camera work in the film is excellent, with various shots filmed with cameras mounted on different parts of MiGs and other planes. 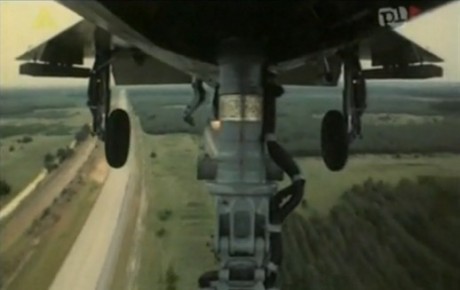 The historical context imposed by the Cold War made the tactical experts wonder how to get rid off one of the basic drawbacks of an airplane – runway dependency. The reality of nuclear war to come was brutal; airstrips and their coordinates were not secret, neither in the West nor in Soviet Russia. Obviously they would be destroyed in the beginning of any conflict. 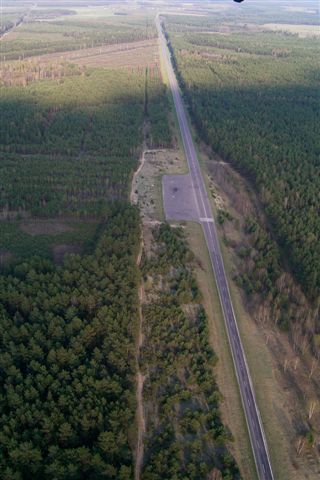 The air superiority could be achieved by destroying the infrastructure needed for the airplanes to operate. Dispersing the aircraft was an idea which was often talked about after the WWII and some countries developed a concept of highway strip.

The Polish Top Gun-like movie was shot in various locations, and makes extensive use of so called DOLs which stands for Drogowy Odcinek Lotniskowy, which is a Polish name for highway strips.

Poland had 21 highway strips. Usually these improvised runways are section of road with wider ends to provide parking spaces for the planes and ground crew.

The only DOL which still serves the initial purpose is located near Stettin (Szczecin). It is located north of the city nearby non-existent village named Rzęśnica on the Voyvodeship Road 142 nearby the S3 State Road on the German-planned highway towards Kaliningrad.

This highway was bulit in the 1930s by Adolf Hitler and was a part of the Reichsautobahn network which emerged before the WWII.

The remaining ones present different conditions, but they are mostly out of use due to the technical state.

Poland and Sweden were among the countries that trusted the idea of highway strip extensively. The picture here shows DOL in Przeździęk Wielki – Rustkowo (Wielbark Municipality).

Anyway, here’s the fragment of the movie.

Poland about to buy 64 fifth generation fighter jets. But F-35s seem to be unaffordable

Poland about to buy fifth generation fighter jets. Which ones is still unclear. During a conference held on Feb. 6, 2014, Ministry of National Defence announced Poland will buy 64 fifth generation jets. The new […]

ZLOT (meaning the gathering) is the name of an annual exercise that takes place in Krzesiny AB near Poznan in the Greater Poland district. Ending on Oct. 24, its peculiarity is that all the types of […]

Polish Air Force MiG-29s at work: night sorties of the Fulcrum are spectacular! Two weeks ago we were invited to visit the Minsk Mazowiecki airbase, near Warsaw, to witness the training sorties performed by the […]