Drones have become so smart to decide, autonomously – without human intervention, to abort landing on an aircraft carrier because of an internal problem (undetected by the remote controllers).

Even if one may argue whether it is a clever idea to give machine the possibility to overcome human inputs to improve safety, you can’t but notice that human errors remain the root cause of the majority of the mishaps among civil airplanes (ever heard of Asiana Air 214?), military ones and, obviously, UAVs (unmanned aerial vehicles). 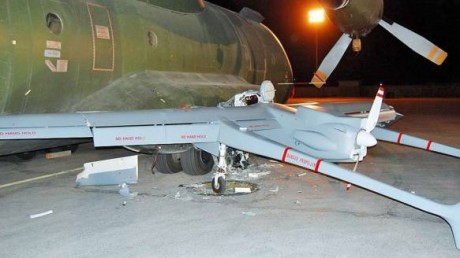 German drones (their pilots, to be fair) seem to be particularly dangerous for other planes.

An exclusive (previously “secret”) video released by BildTV shows what happened at Mazar-i-Sharif in Afghanistan on Mar. 17, 2010.

A German Heron drone taxing at night crashes into a C-160 Transall cargo. Both aircraft were severely damaged by the accident, reportedly caused by the remote pilot, a junior officer, who was unable to stop the made-in-Israel surveillance drone after accidentally engaging the autostart.

Here’s the incident from the drone operator point of view (H/T to Gizmodo for finding it).

The German experience with drones in Afghanistan has been quite embarrassing, as Bild commented.

In 2002 an EMT Luna X-2000 reconnaissance drone passed few meters under the left wing of an Ariana Afghan Airways Airbus A300 with 100 people on board.

After the close encounter, the drone was caught in the Airbus’s wake turbulence, lost control, and crashed over the Afghan capital Kabul.

“Bundeswehr experience with drones is an infinite history of failures, crashes and embarrassment,” Bild says.

Last month, German Ministry of Defense scrapped the Euo Hawk program, after analysis showed that integration of the type in the European airspace woul require over 600 million euros ($784 million), a claim rejected by Northrop Grumman and European partner EADS.

As we described it earlier, a new era in carrier based aviation has started when the X-47B Unmanned Combat Air System (UCAS) demonstrator completed its first-ever carrier-based arrested landing on board USS George H.W. Bush […]

New images of the mystery bird-like drone crashed in Pakistan. Taken in Iraq.

In August 2011, a video clip from Kalam TV brought to light the capture of a mysterious American bird-like drone crashed over southwestern Pakistan (image below). Although initially believed to be a sort of home […]