During Day 23 (Apr. 10), most of the fighting took place in Ajdabiyah, a town located 150 km south of the rebel stronghold of Benghazi. The town is strategic since it is the last bastion before Benghazi and Tobruk further east, that is the major oil terminal that gives the insurgents the ability to export crude and fund their war. Allied aircraft destroyed 6 Libyan government vehicles that were carrying soldiers to the eastern part of the strategic town. According to NATO, during the day, 25 Gaddafi’s tanks were hit (14 near Misratah and 11 near Ajdabiyah, both heavily shelled by the regime) helping the rebels to break the assault by loyalists on Ajdabiyah.

The rebels, who had complained about the NATO response to government attacks during the first two weeks of Unified Protector, have applauded a more aggressive approach over the weekend which enabled them to take control of some key intersections of the disputed town during the most intense government attack of the last week.

NATO air strikes have hit also some logistic facilities as ammunition bunkers and lines of communications (as the road leading to Ajdabiya, where fuel and ammunition was moved forward on trucks.

Late at night, the news of Gaddafi accepting an African Union roadmap for ending the conflict with immediate ceasefire during peace talk with South African President Jacob Zuma, who met Gaddafi at the head of a delegation of African leaders.

1) The Mi-24 depicted in yesterday’s picture from AFP, flying in the previous couple of days, rebels said it was shot down by the loyalists while some interesting details about the Mig-23ML (serial 6472) flown by a rebel pilot forced to land by NATO aircraft because of the UN-imposed NFZ surfaced thanks to a CBS report. In the interview, the rebel pilot says NATO had been notified of the flight and had approved it and he fired 128 rounds destroying a fuel truck and other vehicles carrying Gaddafi’s troops even if NATO disputed his account. 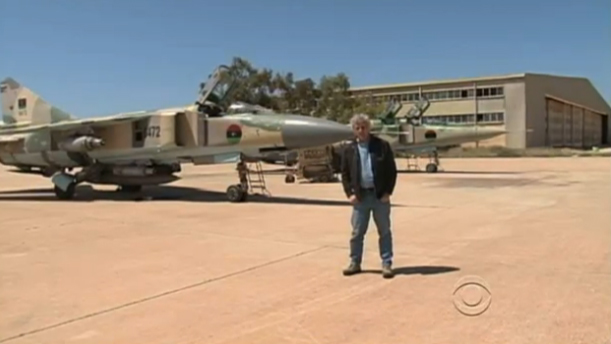 2) In the last few days, radio hams from Europe reported of a presumed PSYOPS message jammed by loyalist forces. The one broadcasted on Apr. 10 can be heard through a video made available on Youtube:

Even if it is extremely interesting to notice that Gaddafi’s forces are still able to jam allied signals, I don’t believe it is a message broadcasted by an EC-130J Commando Solo. This jammed message is in fact a Security call, probably made by shore based stations or ships, rather than aircraft, to warn ships of navigational hazards. In other recording the word Security, the prefix of such messages, (pronounced “say-cure-ee-tay”) is clearly audible.

Here you can find a recording with a clearer version of the original message: http://soundcloud.com/iw0hk/nato-message-to-libian-vessel

3) During the last 24 hours the Italian contingent flew only 3 missions (each flown with 2 aircraft): 2x AV-8Bs and 1x Tornado IDSs. Since the press release was issued around 17.50LT it is possible that Typhoons and ECRs flew later, during the night. According to rumours reported by the news agencies and newspapers, Italy could be called to contribute to Unified Protector with more Tornado IDS, not only for what concerns ISR missions, but also to conduct air strikes.