From 00.00 to 23.59 of Apr.9, NATO has conducted 133 sorties, 56 of those being air strikes. The total since the beginning of Unified Protector is 1567 sorties and 643 air strike sorties. More than figures, which tell us just a little about the effectiveness of the air campaing (since not always air strikes end with planes dropping their ammunitions on ground targets), the reports coming from Libya seem to be the proof that NATO has changed its attitude, being a bit more aggressive and achieving some important results against the Gaddafi’s forces. After many people, not only on rebel side, argued about a too conservative use of force by the allied aircraft, it looks like that NATO has started to hit loyalist vehicles hard, where and when needed. And it seems also that it is willing now to give the public opinion some proofs of this new attitude.

“In addition to hitting their supplies, our aircraft successfully destroyed a significant percentage of the Libyan Government’s armoured forces,” said Lieutenant-General Charlie Bouchard, the Commander of Operation Unified Protector. “Some of these armoured forces also were involved in the indiscriminate shelling of Misratah. By eliminating these heavy weapons, we are reducing the Gaddafi Regime’s ability to attack the local population.”

“We struck armoured vehicles that continue to fire on civilians in the vicinity of Misrata and Ajdabiya in the East,” added the Commander. “In one particular strike near Misrata, our pilots observed Regime forces loading armoured vehicles onto equipment transporters to be taken forward into population centres. NATO pilots, observing many troops around the transporter, first engaged a tank concealed along a nearby hedge line. This strike destroyed the tank and forced the nearby troops to flee, allowing the second strike to destroy other vehicles with minimal loss of life. We will not always be able to limit loss of life but Regime forces should understand that if they continue to operate these vehicles and follow orders to attack their own people they will be targeted.

NATO continues to observe the use of civilians as human shields by Gaddafi forces. “We have observed horrific examples of Regime forces deliberately placing their weapons systems close to civilians, their homes and even their places of worship,” said Lieutenant-General Bouchard. “Troops have also been observed hiding behind women and children. This type of behaviour violates the principles of international law and will not be tolerated.”

During Apr. 9 press briefing, NATO released some interesting videos of the air strike conducted by the RAF on Day 21, when Tornado GR4s, using Brimstone missiles and Paveway IV bombs in the area of Ajdabiyah (hitting two tanks) and in the area of Misratah (hitting 5 tanks). The “Tonkas” were involved in armed air reconnaissance and overwatch patrols over Misratah, Brega and Ajdabiyah.

At 17.43 Al Jazeera English Libya Live Blog gave the news of a military helicopter with the Libyan rebel flag reportedly seen flying towards the fontline around Ajdabiya on Saturday despite a UN-imposed no-fly zone, showing also a nice picture by AFP of a Mi-24 clearly violating the NFZ (that, worth a remind, applies to both the rebel and governative planes). At 20.41, AJE reported of a Mig-23 flown by a rebel pilot, intercepted and forced to land back at Benina few minutes after take off. The aircraft, was immediately detected by a patrolling E-3 AWACS which directed one of the CAP flights to visually identify it. The Mig did not display any aggressive action and was simply led to land back at the airfield located to the south of Benghazi; the RoE usually require a prior visual contact with the “bogie” (in order to prevent friendly fire) but such violations could be extremely risky as “unannounced” rebel flights appearing on NATO’s radars could be easily mistaken for government planes and being shot down. The fact that they wear Free Libya flag is not enough to determine its intentions (what if the aircraft with the Free Libya Air Force roundel is flown by a pro-Gaddafi?). 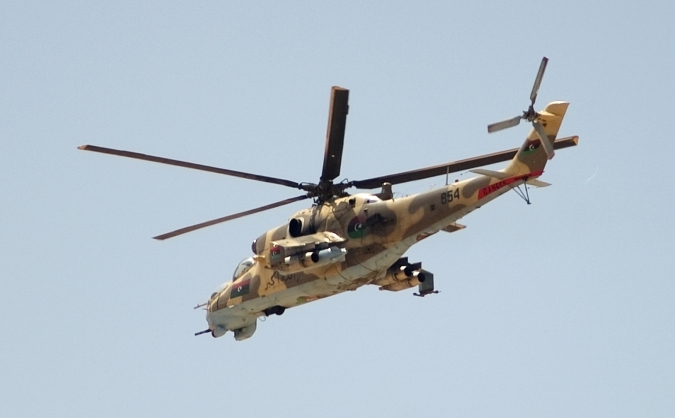 1) After a long “silence” the Italian Air Force has provided through its official website some interesting pictures (without logos or watermarks, well done!) and details about its involvement in the Odyssey Dawn/Unified Protector ops. First of all I’m happy I had already “discovered” (read Day 13 Debrief) that the Tornado IDS of the 6° Stormo with Reccelite pod were transferred under the NATO command and were flying ISR (Intelligence Surveillance Reconnaissance) missions over Libya from Trapani airbase.

From Apr. 7, also the 36° Stormo is flying with its F-2000 in support of Unified Protector, with some planes deployed to Trapani, where the Italian Task Force is based). The 4 Typhoons of both 4° and 36° Stormo assigned to the NATP are involved in COMAOs (Combined Air Operations) and fly with 4 IRIS-T, 4 AMRAAM missiles and 3 drop tanks, a really “heavy configuration”.

We have discussed a lot about the Tornado ECRs and about the  KC-130Js and Tornado IDSs used in air-to-air refuelling missions. Less known is that the Italian Air Force has been providing 24 hours services to support flight operations in Since the beginning of the operations, Italian Air Force has granted the use of seven air bases at Trapani Birgi, Gioia del Colle, Sigonella, Decimomannu and Aviano: logistic support, refuelling, air traffic control, weather service, fire service, first aid service and foreign personnel lodging. Furthermore, in connection with the Libyan crisis the Italian Air Force has reinforced the national air defense/QRA system and raised the level of readiness. An increased number of Typhoons of 4° and 36° Stormo and F-16s of 37° Stormo are ready to take off in few minutes in order to intercept and counter any suspicious aircraft and without authorization for the overflight of national airspace. Moreover, a SPADA anti-aircraft missile battery was based at Trapani in order to stregthen the  air defense of the airbase. Even the SAR service has been reinforced with HH-3F and AB.212 helicopters ready to perform search and rescue missions from various airbases located across the Italian peninsula.

2) RNoAF F-16s have bombed about 30 targets in Libya. In an interesting article Morten Haga Lunde, a Norwegian high rank officer, explained that the main task of the coalition is to protect the civilian population in Libya against the abuse and murder from the Libyan army and the Libyan military system. He acknowledge the problem that, performing an air strike, the allied aircraft do not who is actually using those weapons that can fire into populated cities. For this reason, it is very difficult to distinguish who is inside a tank when this is seen as a legitimate target because the situation is extremely dynamic, with fighting shifting back and forth.

The following picture, taken by contributor Giovanni Maduli, were not Photoshopped. They show the Thunderbirds opposing solos F-16s performing their famous mirror passes (belly-to-belly calypso pass and inverted one) at Jesolo Air Extreme 2011. From […]

The Royal Air Force has just unveiled another special-colored “Tonka” ahead of the retirement of the aircraft from active service in March 2019. Few days after the IX(B) Sqn unveiled theirs, the 31 Sqn, also […]