This year is special when it comes to the relationship between the Viper and the Polish Air Force since it has been 10 years since Poland has acquired this slick airframe, significantly modernizing the inventory which remains at disposal of the military aviation units.

The anniversary provides an interesting opportunity to sum up the history of the relationship between the Lockheed’s jet and the Polish Air Force.

Within the Polish Air Force, the F-16 “Jastrząb” (Jastrząb – Northern goshawk – is the Polish name for the F-16 jet) is being used for a variety of missions, including air-superiority, close air support or reconnaissance with the application of the Goodrich DB110 pod. 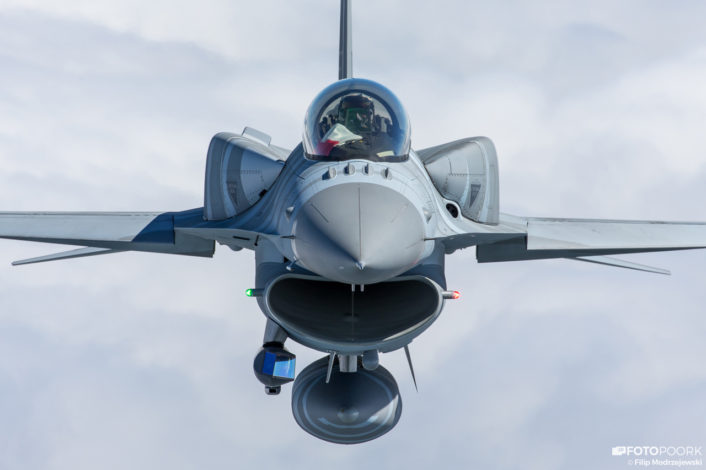 The Polish Air Force’s F-16 aircraft are stationed at two main locations, namely the Krzesiny-Poznan airbase and Łask airbase, with the latter one being located close to the city of Łódź. Currently, Poland has its F-16 aircraft from Łask deployed to Kuwait, supporting Operation Inherent Resolve performing the recce role.

Being a part of the Warsaw Pact up until the late 1980s, Poland Armed Forces have operated Soviet equipment for decades. MiG-15s, MiG-17s, MiG-21s, MiG-23s, Su-22s, Yak-23s, MiG-29s were (and in some case still are) flown by the Polish Air Force (with the Fulcrums, in particular, procured at the end of the Soviet Union’s existence). 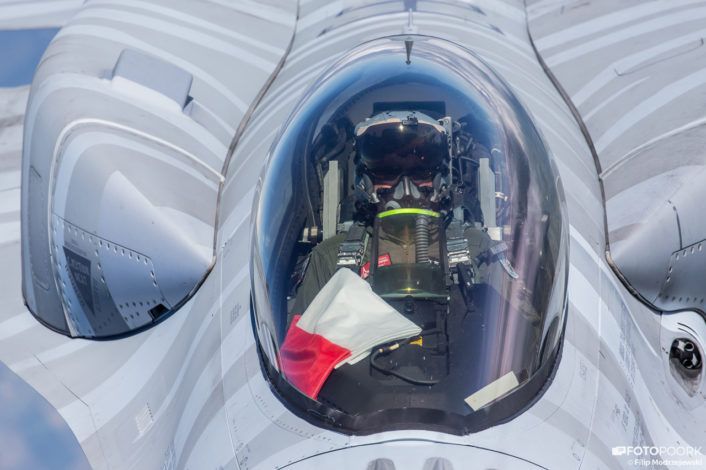 The Air Force’s structure was also largely similar to the organization patterns utilized in the East.

Beginning in 1989 the geopolitical landscape changed and Poland started to have ties with the West until it became a NATO frontline nation, joining the alliance in 1999. Prior to that event, the Armed Forces suffered reductions and cuts, along with a restructuring process. 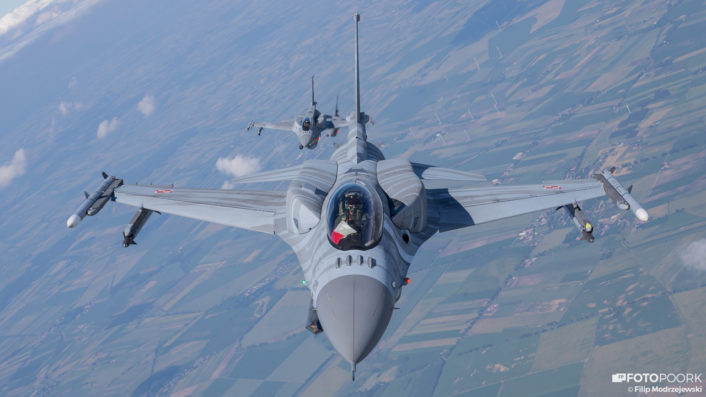 With the entry into NATO the operational tasks for the Polish Armed Forces, including the Air Force, were redefined: Poland was tasked with stopping the potential adversary during the initial phase of the conflict, with air superiority being one of the cornerstones of the applied strategy. Hence the main task for the Polish Air Force is to provide control within the Polish Airspace, as a part of the NATO IADS (Integrated Air Defence System), and secondly, the air branch is to provide support for the other armed services, including the Navy and the Land Component.

The main element of the Polish air defense modernization process was in the acquisition of the F-16 aircraft used by three out of seven squadrons of the Polish Air Force, alongside the MiG-29 and Su-22 fast jets. 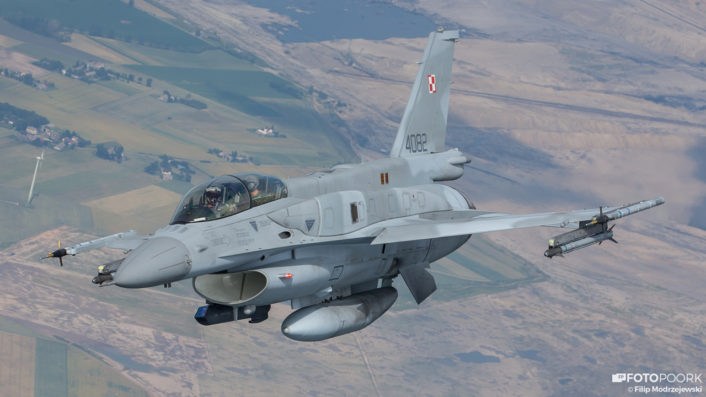 The first glimpse at the future of the Polish Air Force could be caught at the beginning of the nineties: between Aug. 23 and 25, 1991, an Air Show took place at the Ławica airport in Poznan, during which U.S. Spangdahlem-based F-16C airframes made their first ever appearance in Poland.

In 1994 Poland joined the “Partnership for Peace” program. The initial plan contained within the “Armia 2012” modernization program assumed that 160 new fighter aircraft were to be acquired. The tender procedure which was announced at the time did not even reach the implementation stage,  as the MoD’s leadership changed and the multi-role jet tender was postponed.

The undertaken analysis suggested that the new fighters would be utilized both within the framework of national defense, as well as within NATO deployments. The task range for the jets included air superiority, air interdiction, close air support, navy support and reconnaissance. 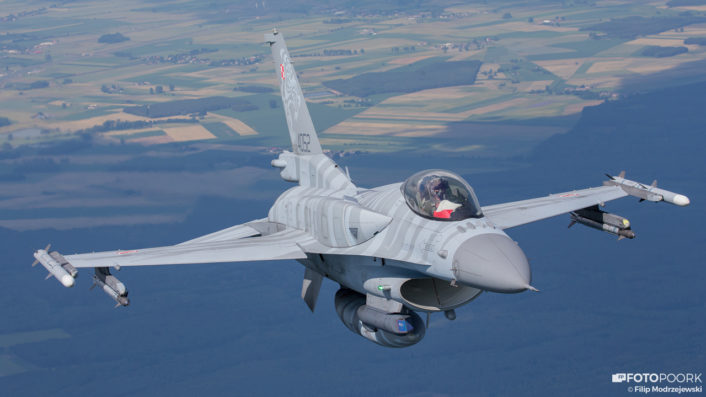 Meanwhile, at the end of the year 2001, Germany decided to deliver, for free, 23 MiG-29 jets for the Polish Air Force, as the Fulcrums were being withdrawn by the Luftwaffe at the time. This, in a consequence, led to a decision which resulted in limitation of the multi-role fighter acquisition plan down to 48 examples.

The relevant tender began in 2001, involving three offers: Lockheed Martin F-16 Block 52+, Dassault Mirage 2000-5, and SAAB/BAe Gripen. The F-16 won the tender, with the highest rating and the corresponding decision was announced on Dec. 27. 2002. The contract, concerning the procurement of 36 F-16 single-seaters and 12 F-16D twin-seaters, was concluded on Apr. 18 2003, with prospects of receiving the first airframes manufactured by the Lockheed Martin company in 2006. 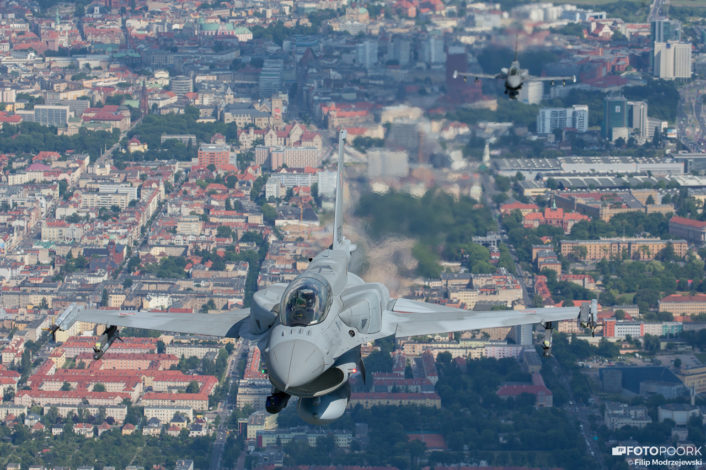 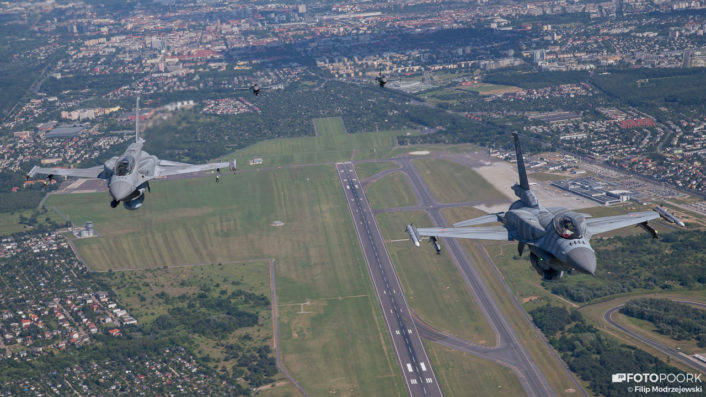 When it comes to the direct legacy, the F-16 replaced the old MiG-21 Fishbed aircraft which were stationed both in Łask, as well as in Krzesiny.

The Łask airbase, at the moment, is a home for a single squadron of the F-16 jets, contrary to Krzesiny, which hosts two squadrons, however, the base located in the central Poland has the DB-110 reconnaissance pod at its disposal, and the Łask crews specialize in recce sorties, as mentioned above. 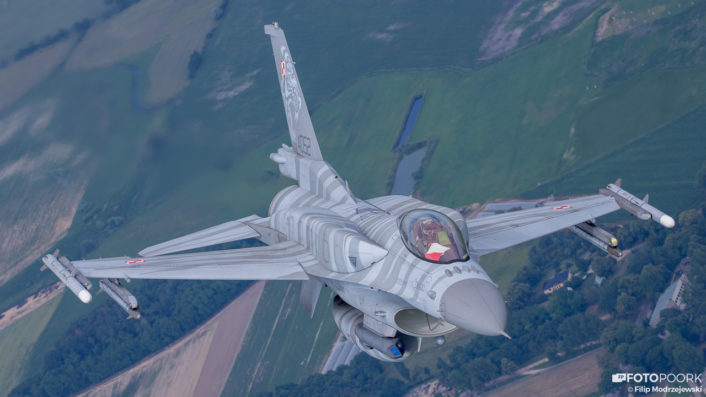 When it comes to the air-to-air ordnance used by the Polish Vipers, the inventory includes  Raytheon AIM-120C-5 AMRAAM and Raytheon AIM-9X Super Sidewinder missiles. The air-to-air weapons system is complemented with a Northrop Grumman (Westinghouse) AN/APG-68(V)9 radar and IDM Link 16 suite, ensuring that the jet has net-centric capabilities at its disposal.

The air-to-ground weaponry  includes the AGM-65G Maverick Missiles, along with Mk 82 and Mk 84 bombs, complemented with Paveway laser guided and JDAM satellite kits. The inventory above also includes the AGM-154C JSOW stand-off weapon. However, this, however does not exhaust the air-to-surface ordnance remaining at disposal of the Polish jet. 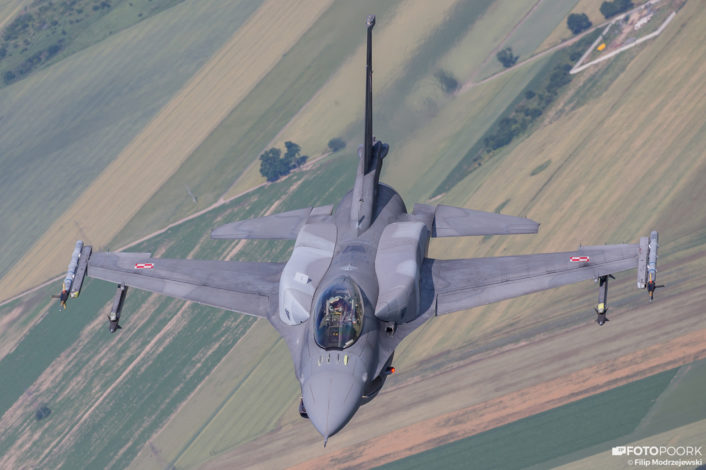 The F-16 is one of the cornerstones of the Polish deterrence policy, also known under the name of “Polskie Kły” [Polish Claws]. As a result of the aforementioned arrangement, the Polish MoD decided to acquire AGM-158 JASSM missiles for the jets, with a prospect of procuring the JASSM-ER extended range variant. We have described the JASSM procurement in several articles in detail. 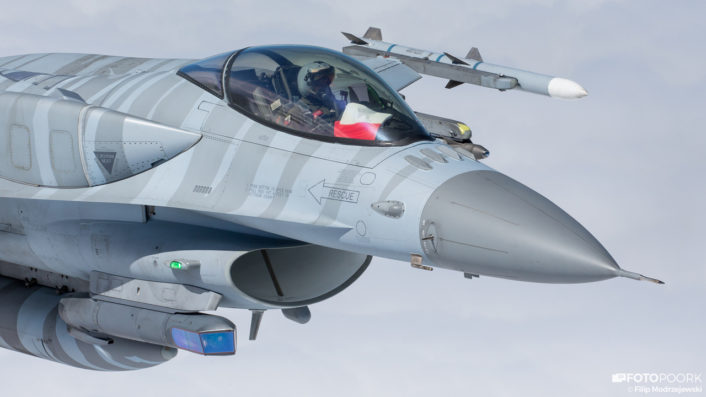 Poland is also looking forward towards acquisition of the Orbital ATK AARGM anti-radiation missile which was vividly marketed during the last year’s Radom Air Show and the Kielce MSPO Defence Salon.

Noteworthy, it was not until last year that the Polish Air Force established a Tiger Demo Team is based at the aforementioned Krzesiny airbase and made its first international appearance during the RIAT air show this year. 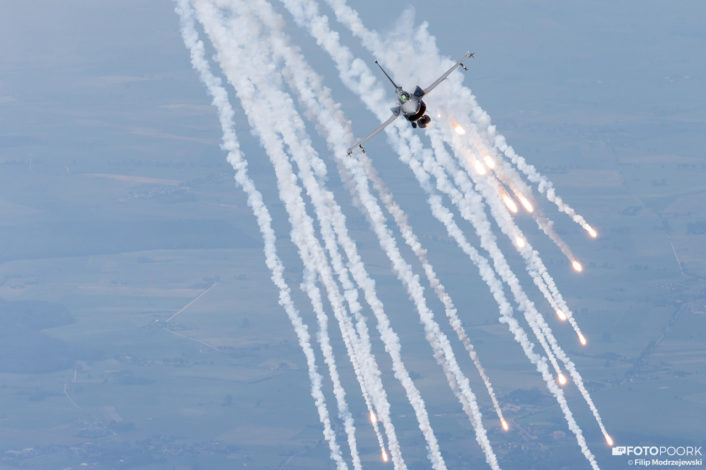 Within the presented photo-set, the jet carrying the Polish flag in the cockpit is the Demo Team’s airframe.

The photographs we are presenting are unique, due to the fact that it is the first time when 4 Polish F-16 jets are presented together, in the air, flying with the conformal fuel tanks on top of their fuselages – such configuration has never been photographed and captured before. Two airframes come in the C variant, while the remaining two jets are in the D version. 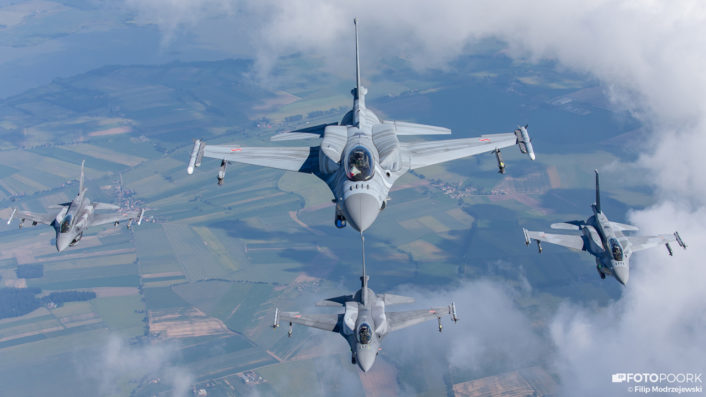 The shots captured by Filip Modrzejewski were taken from the rear ramp of the CASA C-295M transport aircraft of the Polish Air Force. The main portion of the photo-shoot took place over the Greater Poland voivodeship, also over the centre of Poznan and the Ławica airport. 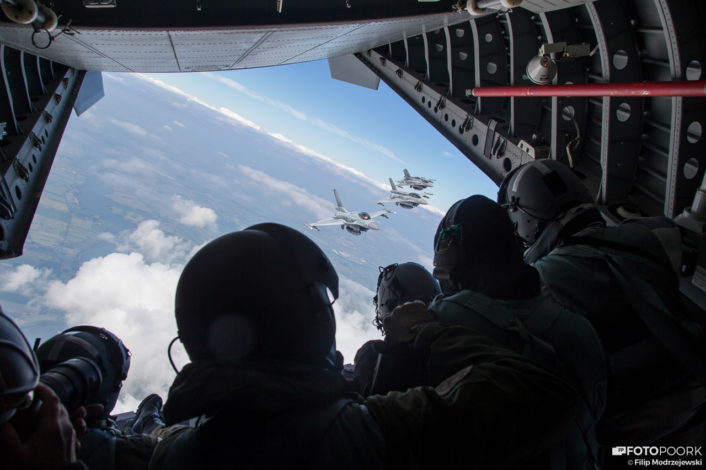 The AW149 is the selection made in the Perkoz program. Head of the Polish MoD, Mariusz Błaszczak, signed a procurement agreement on Jul. 1, 2022, at the PZL-Świdnik facility owned by Leonardo, covering the procurement […]