This will significantly increase the Polish Vipers’ strike capabilities. Poland currently operates 48 F-16 airplanes in Block 52+ variant, where the ‘+’ means they have CFTs (Conformal Fuel Tanks).

The strike capability of JASSM is immense, as it is able to destroy targets at distances of 370 km (ca. 220 miles). This allows the Viper to destroy the target outside of the SAMs (Surface to Air Missiles) envelope, which is a major step in comparison to the current Polish A2G armament which has a maximum range of 70km.

In other words, the AGM-158 might be considered a strategic weapon.

JASSM is a very modern weapon produced by Lockheed Martin. Being a long range missile, it requires the US Department of Defense to accept potential transaction, in cooperation with the US Congress.

The AGM-158 has been used by the Americans since 2003 and it is one of the most modern missiles in the world. The new missile uses its inertial navigation and GPS (global positioning systems) to find its target, and an infrared seeker for pinpoint accuracy right before impact. 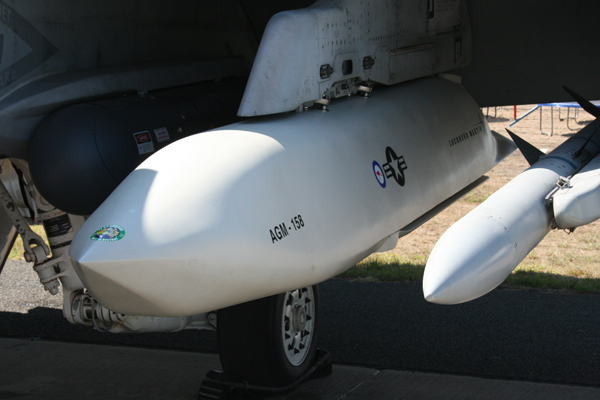 The spokesman of the Polish MoD informs that currently the Ministry is awaiting for the US consent.

The Rzeczpospolita daily speculates that no formal documents would be sent to the US without the deal being accepted, and the documents have already been passed on to the US, therefore the purchase of the missiles is almost certain.

What is not established though is the number of missiles to be purchased and the price. I

n the light of the latest budget cuts in the defense sector (this year the MoD received a warning that they might not receive all the money allocated to them), it is still a tricky question. Nevertheless it is not until 2015 that the Vipers might get the missiles.

Poland is to be the third foreign JASSM user right after Australia and Finland who bought the weapon after 5 years of negotiations for their F/A-18 Hornet jets. Finland bought 70 missiles at the price of 180 million dollars.

According to the Dziennik Zbrojny’s analysis, the Finnish purchase had several dimensions, not only strategic but also political.

After all, JASSM is not an easy weapon to buy.

Firstly, the missile purchase is a strategy that will allow the US to relocate own forces to the Pacific region, as the Baltic is quite hard to reach for the Americans.

What is more, Finland is considered to be stable when it comes to the political dimension. Even though history of the relations of Finland and Russia is tragic, the relationship is still not as harsh as the one we may witness in Poland. The monuments of Russian emperors still stand in the Scandinavian country.

The Finnish defence potential acts as a deterent towards the Russia in the arctic region and allows the U.S. to act against the Russian fleet.

Finland is aware, how important the asset of JASSM is, as almost whole territory of their country is under an umbrella of the Russian long range S-300 and S-400 SAM systems.

Nonetheless the strategic facilities in Russia might be easy targets for the Finland’s AF, the Northern Fleet being the main one.

Finland is also one of the few European users of MLRS non-guided missiles.

There is a growing concern within the groups of strategists in Poland that the country needs a weapon that would act as a fear-factor tool in the international relations. Still, the JASSM requires good recon before use, due to the fact it is quite an expensive weapon that is to be used mainly against the targets of strategic importance.

Tomasz Szatkowski, who is the head of National Strategic Studies Center says that 1,000km range JASSM variant would be a much better choice. He also claims that Poland needs to obtain submarines with strategic missiles of Tomahawk class.

JASSM will also provide an asset that will partly replace the loss strike capability that will occur with the retirement of the ex-Soviet Su-22M4 Fitter aircraft. Increasing the strike capabilities of F-16s is certainly acting against the deterioration process.

This can also be seen through the light of this year’s Radom Air Show display programme, as the “dogfight” between MiG-29 and F-16 was replaced with a CAS demonstration featuring 2 F-16s.

The JASSM might be a perfect weapon against the mobile command centers, but such use would require closer cooperation with the U.S. in the field of intelligence. What’s more, the 370km of range would allow Polish F-16s to strike the targets in Belarus or Kaliningrad regions.

The areas in the aviation to be modernized include the air defence, new VIP and combat support helicopters, UAVs, new simulators and modernization of the transport aircraft.

Nonetheless the most important programme now aims at finding a new training aircraft. At the beginning it was to be a jet in a LIFT variant (Lead-In Fighter Training), but now the concept has changed and Poland wants to purchase AJT (Advancet Jet Trainer) aircraft. What is more Orlik turboprop trainers also undergo an upgrade programme.

The geopolitical position of Poland requires the country to be a buffer zone between the West and East. On one hand, it is a very delicate role, on the other, though, some experts claim Warsaw needs its own tools to scare-off potential aggressors from the East.

Satellite Photos Show Cold War Era Biplanes on Seshcha Airbase Near Ukrainian Border. In a bizarre move that seems more at home in a Tom Clancy novel, Russia may be preparing to use antiquated Antonov […]