The Colombian contingent, supported by 45 Colombian airmen, arrived at the base home of some of the American iconic B-52 strategic bombers on Aug. 13 and immediately started engaging with their U.S. Air Force counterparts in order to prepare for the two-week exercise.

Green Flag East is one of Air Combat Command’s premier close-air-support exercises, which rehearses close-air-support tactics, while enhancing interoperability with Air Force and Army forces: during GF pilots train in a simulated, high-threat environment, while maintenance and support personnel are provided an increased tempo in generating fully mission-capable combat aircraft.

In addition to the Colombian aircraft, U.S. Air Force A-10s from Moody Air Force Base, Ga.; F-16s from the Texas Air National Guard; KC-135s from McConnell AFB, Kans.; E-3s from Tinker AFB, Okla.; and E-8s from Robins AFB, Ga.; have taken part in the exercise. 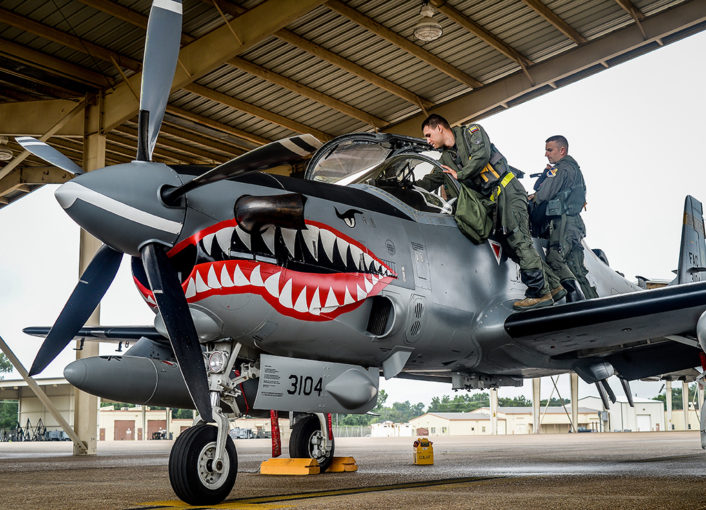 Interestingly, the Embraer A-29 Super Tucano is among the most successful CAS platforms all around the world and one considered to be among the candidates to replace the A-1o Thunderbolt in the role of supporting the troops in contact with the enemy forces. Already in service with 10 air arms around the world, the propeller-driven aeroplane has the ability to carry a wide variety of bombs and machine guns; given the U.S. Air Force plan to retire its A-10 fleet in 2022, the Super Tucano has often been said to be a possible A-10 replacement in the close air support role.

No One Enjoyed the Air Power Demo at Nellis AFB as Much as This Door Gunner!

Hanging Halfway Out the Door of a Sideways Pave Hawk, No One Had a Better View. Last Weekend’s Aviation Nation Air Show at Nellis AFB outside Las Vegas, Nevada, was a magnificent post-pandemic return for […]