The pictures in this post were taken at the end of January at Ahmed al Jaber airbase, in Kuwait, where A-10 Thunderbolt attack planes belonging to the 163rd Expeditionary Fighter Squadron “Blacksnakes”, part of the 122nd Fighter Wing of the Air National Guard, based at Fort Wayne, Indiana, are currently deployed to support Operation Inherent Resolve against IS militants in Iraq and Syria. 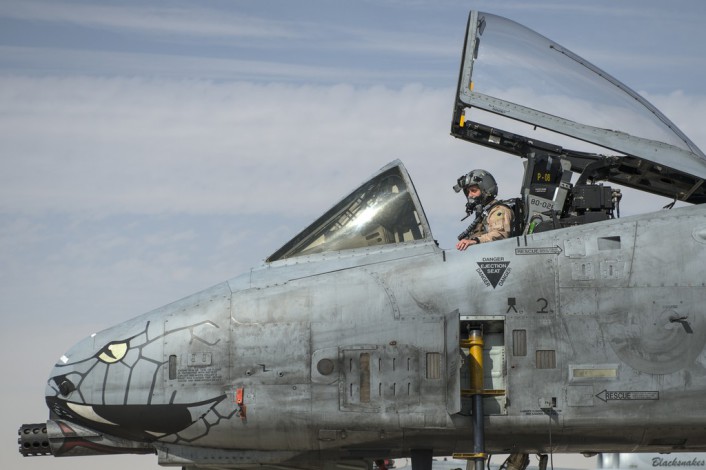 Although some videos of the Thunderbolts using their GAU-8 Avenger a 30 mm hydraulically driven seven-barrel Gatling-type cannon to support Kurdish fighters had already surfaced, the photographs released by the U.S. Department of Defense provide some more details and clearly show, for the first time, the loadout of the “Hogs” involved in the air war against ISIS. 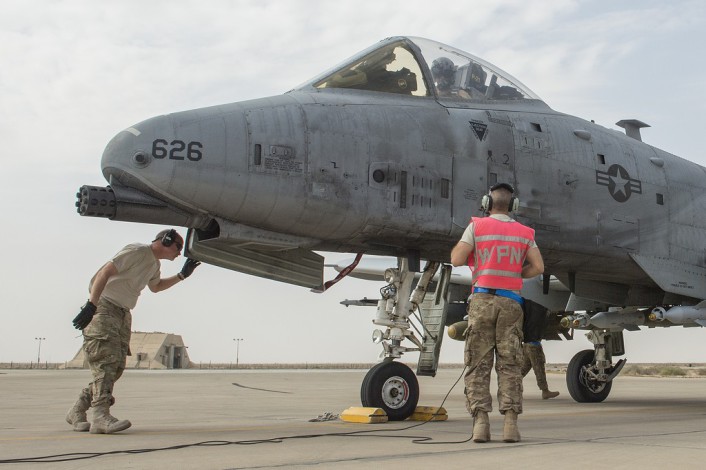 Noteworthy, as noted with little differences on previous deployments in Afghanistan, along with their trademark cannon, the aircraft carry an interesting mix of rockets, missiles and bombs, that enable the pilot to select the proper weapon to attack any kind of target, from technicals, to tanks, to armored vehicles, to light and heavy fixed or moving targets: AGM-65 Maverick missiles (on station 3 and 9), LAU-131 rocket launcher (station 2), GBU-12 Paveway LGBs (Laser Guided Bombs – on station 5 and 7), GBU-38 JDAMs (Joint Direct Attack Munitions – station 4 and 8) and an AN/AAQ-28 Litening AT targeting pod (station 10). 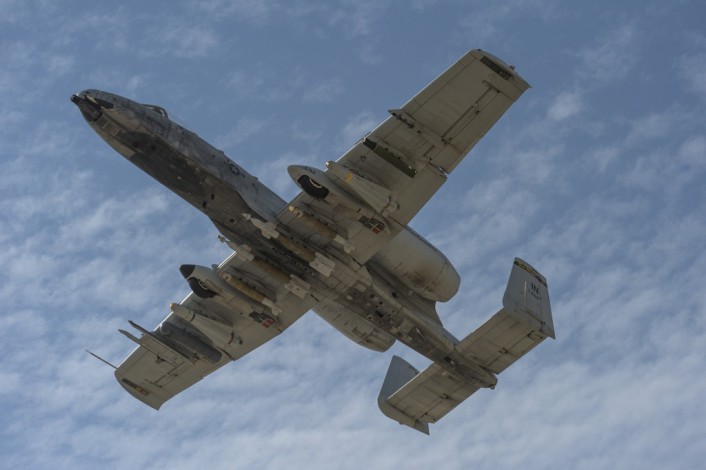 Considered that there is no risk to meet any enemy fighter, the A-10s don’t carry any AIM-9 Sidewinder air-to-air missile.

By the way, as highlighted by Wim Zwijnenburg, the Pentagon has just confirmed that: “[…] US and Coalition aircraft have not been, and will not be, using depleted uranium munitions in Iraq or Syria during Operation Inherent Resolve,” meaning that the 30 mm Depleted Uranium ammunition has not and won’t be loaded onto the A-10s. 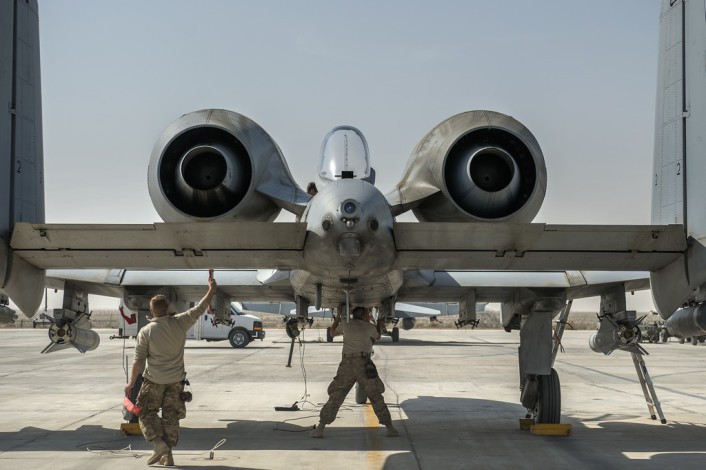 The pilots wear the Scorpion Helmet Mounted Cueing System (HMCS), the world’s only, full-color Helmet Mounted Cueing System: the helmet system enables the aircrews to rapidly cue sensors or weapons, and to designate targets by simply “looking at” the target or point of interest. Furthermore, it takes all the information collected by the plane’s sensors and positions it on the ground so that each pilot can look at a heads-up display and know exactly where the ground targets are positioned without the need to look inside the cockpit and never losing visual contact of these targets. 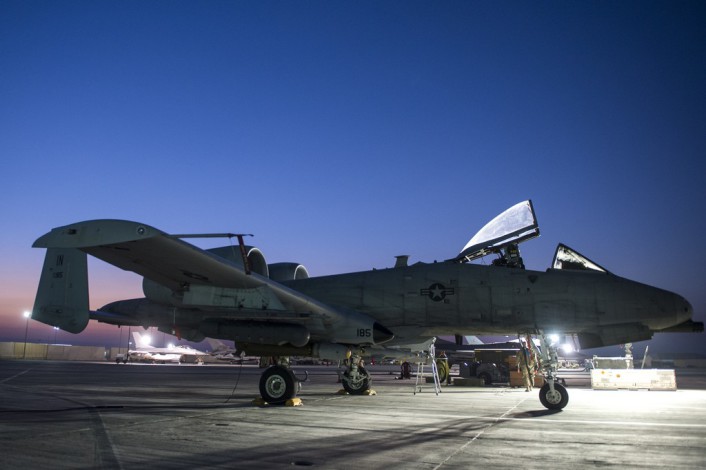 While the “Warthog” remains one of the weapons of choice for Close Air Support and Battlefield Air Interdiction missions against the Islamic State, the U.S. Air Force has announced that 18 planes (and maybe 19 more) will be mothballed later this year and placed into “Backup Aircraft Inventory” status to save money and free up experienced maintainers destined to the F-35 fleet. 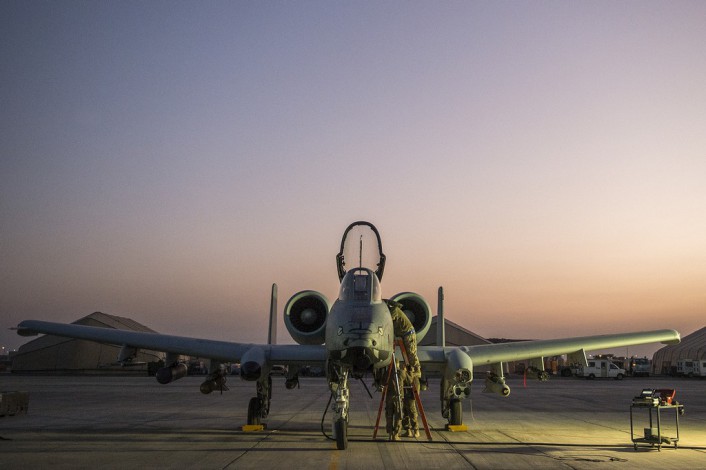 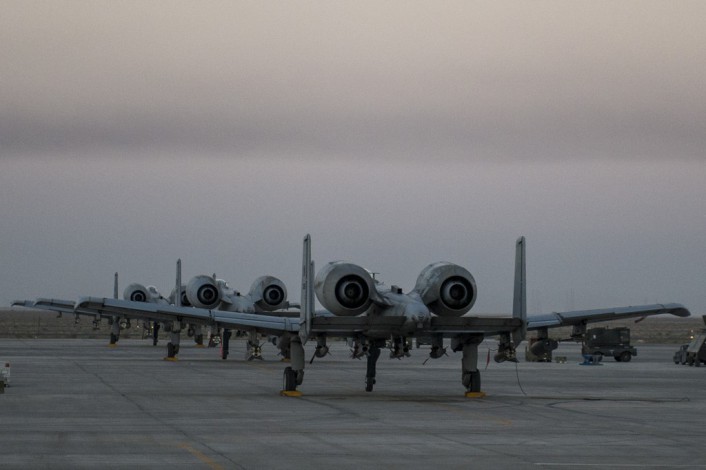 23 tanks destroyed in one day: the A-10 Warthog in action

Hawg vs Iraqi tanks during ODS. Without the A-10A Thunderbolt II attack planes, allied forces would have suffered a far higher cost in terms of lives during the ground phase of Operation Desert Storm in […]

U.S. Coast Guard wants to get its hands on 14 C-27J Spartan planes

Pentagon has recently announced  the decision to assign seven C-27J Spartan airlifters to the U.S. SOCOM (Special Operations Command). The aircraft are part of the batch of 21 tactical transport aircraft procured by the U.S. […]